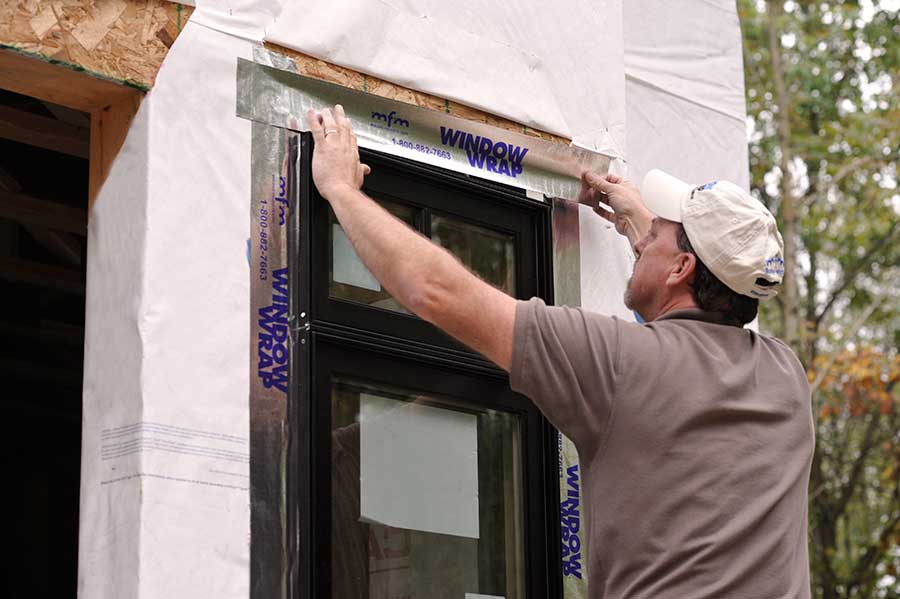 Waterproofing in general is intended to prevent water infiltration. For the built environment, this incorporates all six sides of a traditional building, the below, four walls, and top surfaces. In the waterproofing world, there are self-adhesive and mechanically fastened products. There are advantages to both types of systems, and also projects where it makes sense to use them and where it doesn’t.

Advantages
Self-adhered waterproofing is common in the roofing industry because it is easy and fast. Another name for self-adhered waterproofing is “peel and stick.” As that name makes it sound, it’s not much different than applying wallpaper. But you have to know how to use them correctly in order for them to function properly. David Delcoma is the product marketing manager at MFM Building Products in Canton, Ohio. He says they are easy to work with, with no special application tools needed. “They overlap on top of themselves to create a nice bond,” he says. “You just need to get as much surface contact between the membrane and the substrate as possible.”

Chad VanderWeide, national sales manager for Resisto, which makes insulation, roofing, and waterproofing, among other building products, says there is a lot of quality management in the production of peel and sticks. “They’re going through a machine and they’re measured at the thickness that is required by us or by code,” he says. “So if the code says 60 mil waterproofing membrane, it comes off the machine at 60 mils.” A fluid-applied product relies on the quality of the installer, so the thickness can be less consistent. On the other hand, the installation of a self-adhesive membrane is easier, comes with a  strong reinforcement already laminated on elastomeric bitumen and does not require any sophisticated tools. 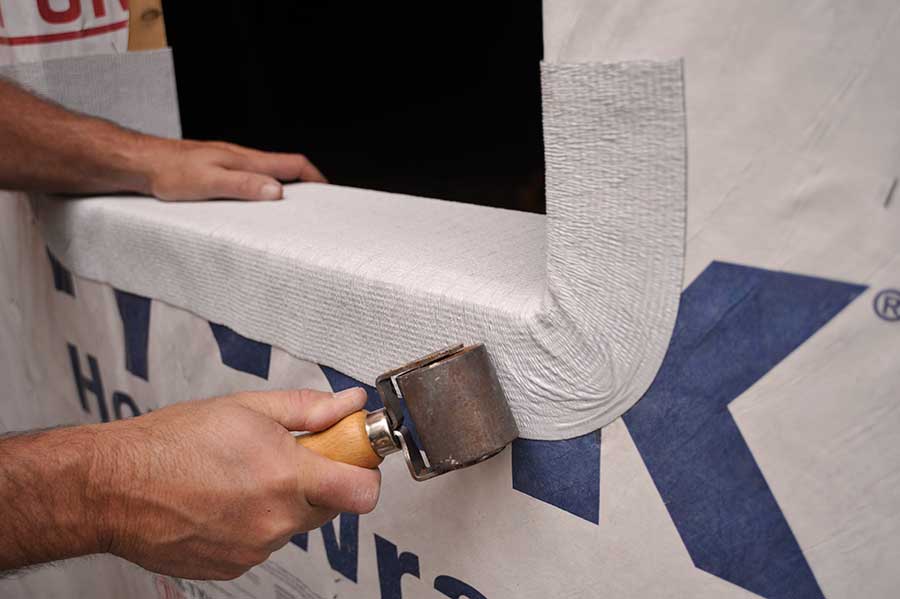 According to Mark Franciosi, national technical manager for Polyglass’s building envelope solutions, the benefits of self-adhered membranes (SA) for roofing and waterproofing applications are clear. They include:

Correct Installation
A common usage of self-adhered waterproofing membrane is around windows and doors. They effectively prevent air, insects, moisture, and water from getting into the area around the window, and they’re easy enough for anyone to apply. 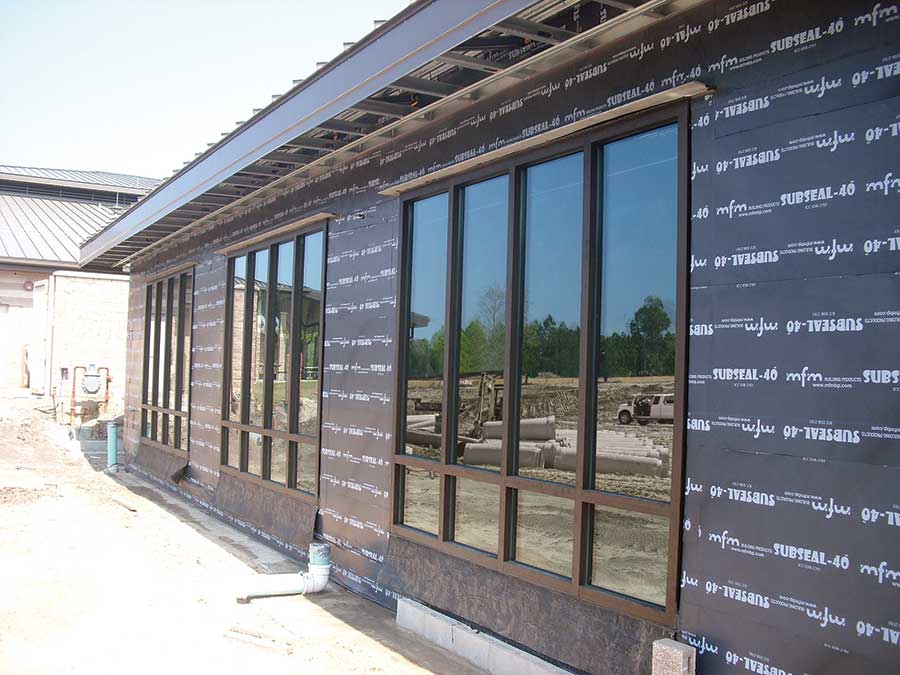 A sidewall application showing the technique of overlapping the prefabricated self adhering sheet-type waterproofing membrane where the structure will be covered by brick.

“Windows are prone to leaks because essentially what you’re doing is cutting a bunch of holes in your house and sticking in a window with caulk,” says Delcoma. “Over time the caulk will dry and shrink and water will work its way down in there. That leads to drywall damage and even formation of mold inside that wall cavity.”

Delcoma says SA membranes don’t adhere well to concrete blocks. In the Gulf Coast states, it is common to build with concrete blocks. Most builders in those areas will spray or roll on a liquid-applied waterproofing coating around windows and doors.

“You can use a self-adhered membrane in that situation, but you have to prime it first, so it’s more steps,” says Delcoma. MFM manufactures a membrane called SubSeal that is usable on a concrete wall provided the foundation is primed first.

“It’s durable, you can backfill against it and put rocks and dirt up against it, and that’s fine,” he says. 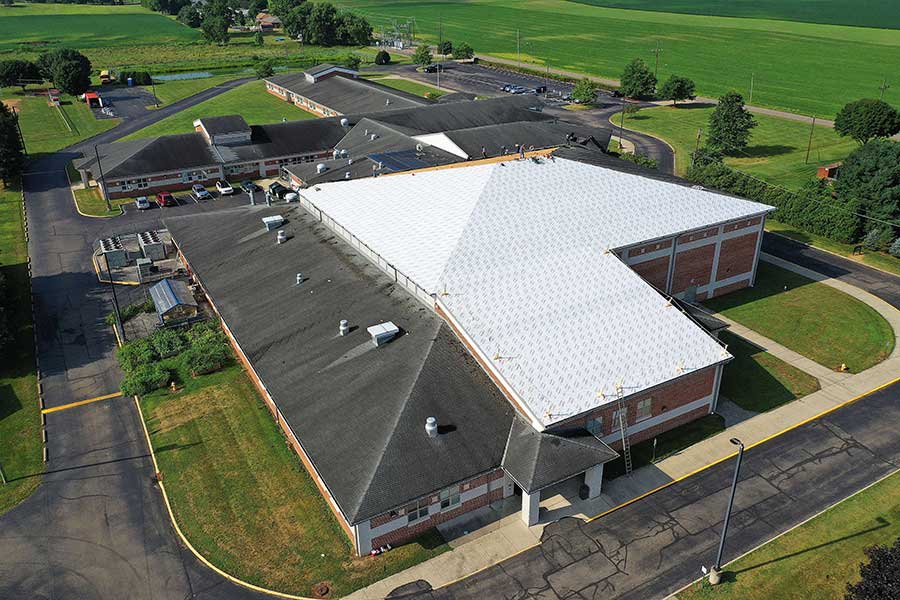 When installing self-adhered membranes around windows, Delcoma says the most important thing is to follow the manufacturer’s installation instructions. “That will save them the callback on a leaky window problem,” he says.

Ventilation is key to the self-adhered roofing membrane. Air and water will not  pass through the membranes, which is the goal, of course, but ventilation is then required, especially on roofs. “If the roof is not ventilated underneath, moisture will build up inside of your structure,” says Delcoma. “Installers sometimes forget that. For instance, we had a guy who put together pieces of wood to form a column and put a self-adhered membrane on the outside of that column. And then covered it up with a stone siding. There was no air circulating in that empty space, so moisture built up and it rotted the wood. Anytime you use a self-adhered product, you’ve really got to keep in mind that you need to ventilate the space on the other side.”

Self-adhered Membranes For Roofing
Steep-slope and low-slope roofs have different performance needs. “In steep-slope roofing, the majority of self-adhesive membranes in North America consist of a polymer-modified asphalt compound (APP, SBS, or hybrids) with a variety of surfaces such as film, fabrics, or small sand-like aggregates,” says Steven C. Wadding RRC, RRO, CDT, corporate projects manager for Polyglass. “Some versions may also incorporate an internal reinforcing mat such as a fiberglass mat. For low-slope roofing applications, the majority of self-adhesive membranes consist of similar polymer-modified asphalt compounds (APP, SBS, or hybrids) and are typically surfaced with a mineral granule. These membranes often utilize internal reinforcing mats such as fiberglass mats or polyester mats. In waterproofing applications, self-adhered membranes typically consist of a top layer e.g. cross-laminated HDPE, polyester or fiberglass mat combined with an adhesive back surface.” 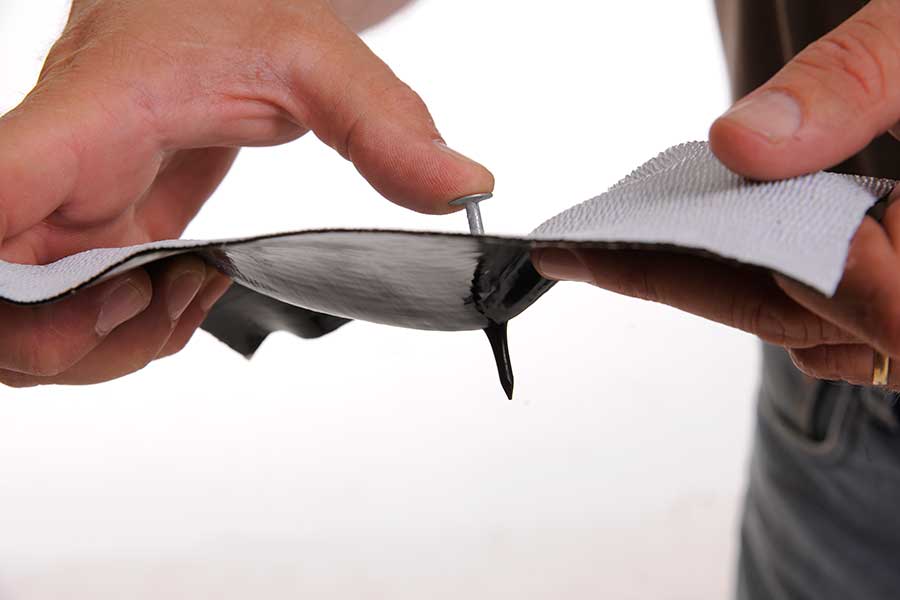 This photo illustrates how a MFM membrane will self-seal around fasteners such as nails, screws, and staples.

When it comes to roofing, decisions must be made regarding the roofing system. “For example,” says Wadding, “in roofing, ventilation must be a consideration if bonding directly to the decking as this could affect attic or other ventilation considerations. In waterproofing, any sheet-applied waterproofing system will have numerous seams in the application and you must ensure the installer follows the manufacturer’s installation guidelines to ensure a watertight system.”

Prevent The Problem
VanderWeide says people often use waterproofing to solve problems instead of preventing them. For instance, dampproofing materials are typically roll-on or spray-on products that don’t typically have the same elasticity as a membrane does. “So when that cracks, a lot of times, you end up with a void or a gap in the foundation which then allows the water to go through the wall,” VanderWeide says. “By using a membrane from the beginning, it adheres to the substrate itself and stretches some and will still waterproof in that scenario, even if there is a crack behind it.”

In general, says VanderWeide, self-adhered waterproofing can be more expensive than other options, so if budget is a concern, that could affect a builder’s decision to use it. Another limiting scenario, says Christian Paré, Resisto’s technical advisor, is trying to apply it on a surface that isn’t flat, such as a stone foundation.

Paré says their Resito self-adhered membranes have a unique trilaminate woven polyethylene reinforcement that makes them more tear resistant and can be backfilled immediately after the installation. A liquid coat, on the other hand, would require drying time in between application and backfilling. They also have a product designed specifically for Insulated Concrete Forms (ICF) that does to not require an initial primer coat.

Self-adhered Waterproofing
By Vanessa Salvia
Self-adhered waterproofing, or peel-and-stick, is common in the roofing industry because it is easy and fast. Self-adhesive technology has more than two decades of track record and offers unique features not found in other systems.
Basement Waterproofing Steps for New and Existing Construction
By Vanessa Salvia
Because of their below-grade location and the impact that the basement’s air quality can have on the rest of the home, it’s crucial to be knowledgeable before undertaking a home basement remodel. Here are some of the most important things to consider when remodeling a basement, either as a homeowner or a contractor who is helping someone with their basement conversion.

Leak Detection Systems Explained
By Joe Dakin
Leak detection has become an important part of the real estate and construction industries. For a long time, detecting leaks was done by visual inspection or using incredibly crude tools. But now, the leak detection industry is undergoing a revolution.

Moisture Meters Are Essential For Roofers
By Del Williams
After a disaster involving water intrusion, moisture meters are crucial to assess and document the damage prior to replacement or restoration.

Be the first to review “Fall 2022 Back Issue” Cancel reply 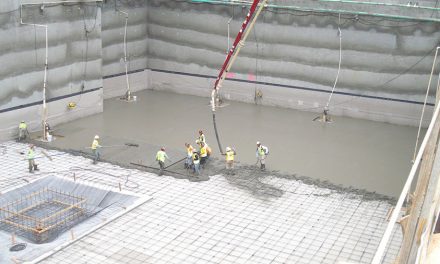 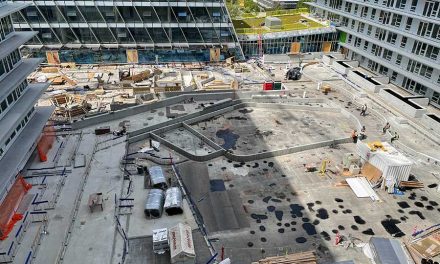 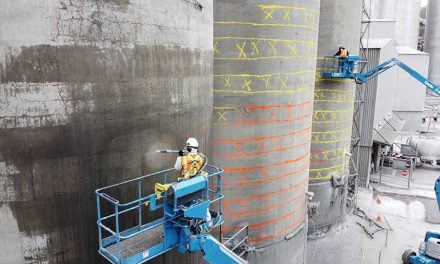