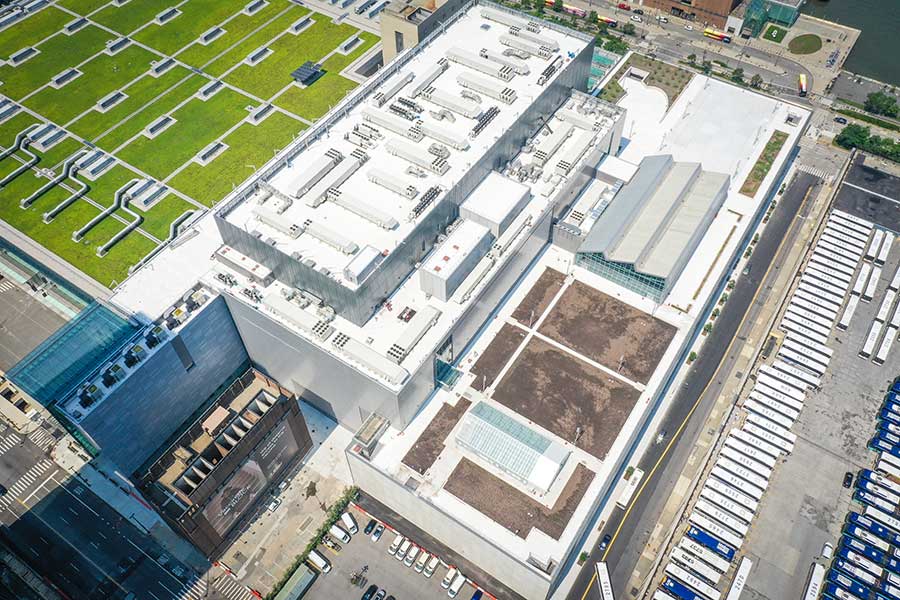 A drone shot of the green roof on the Javits Center in New York, which is now the third largest green roof in the U.S.

Just as wearing light-colored clothing on a hot, sunny day results in a cooler feeling on your skin, cool roofs can make any building feel more cool on a hot, sunny day. A cool roof is one that has been designed to reflect more sunlight and absorb less heat than a standard roof. The higher solar reflectivity, meaning the ability to reflect the sun’s visible and ultraviolet light wavelengths, enables the roof to reduce heat transfer to the building. According to Energy Savers, standard or dark roofs can reach temperatures of 150°F or more in the summer sun while a cool roof under the same conditions could stay more than 50°F cooler and save energy and money by using less air conditioning.

Yes, the color of the roof makes a difference, and designing a white or light-colored roof is an easy way to impart cool roof characteristics. But there is more to it than that. In fact, some areas require them. 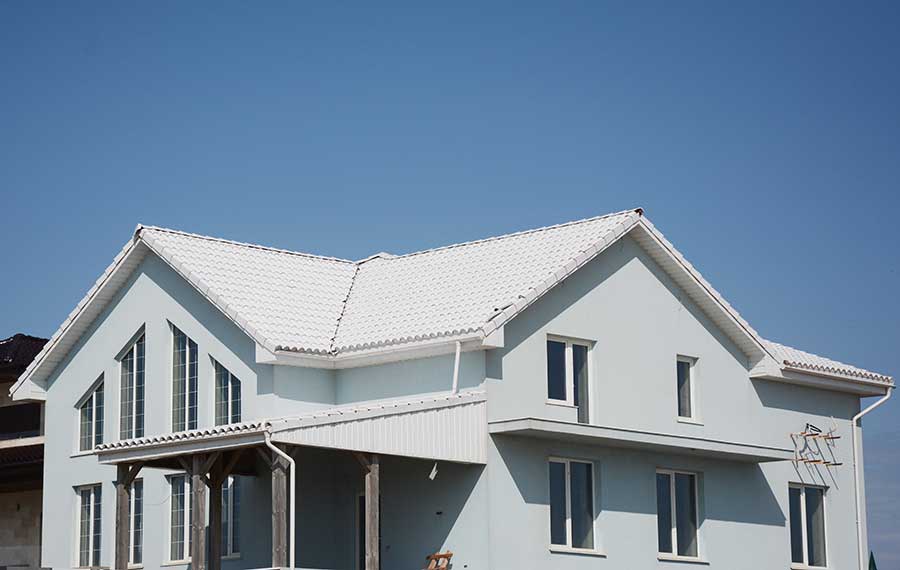 A white roof is just one way to impart cool roof characteristics. But there is more to it than that. In fact, some areas require cool roofs.

In 2005, California required cool roofs on all non-residential, low-sloped construction and re-roofing projects. Title 24 has been updated several times since then to cover more structures, including residential and high-sloped roof applications. As of January 1, 2010, the California Energy Commission’s updated Title-24 Building Energy Efficiency Standards to mandate cool roofs for most residential buildings in many of California’s 16 climate zones. Since then, other states and cities have followed suit, such as Arizona. A Tucson study concluded that cool roofing was found to save up to 50% of cooling costs.

Benefits of a Cool Roof

The primary benefit of cool roofs on homes is that they help lower roof and attic temperatures, which reduces the need for air conditioning on hot, sunny days. On non-residential buildings, they perform in similar ways, reducing the need for air conditioning, decreasing energy use on hot days, helping reduce air pollution and greenhouse gas emissions, and complying with building energy standards and green energy programs. 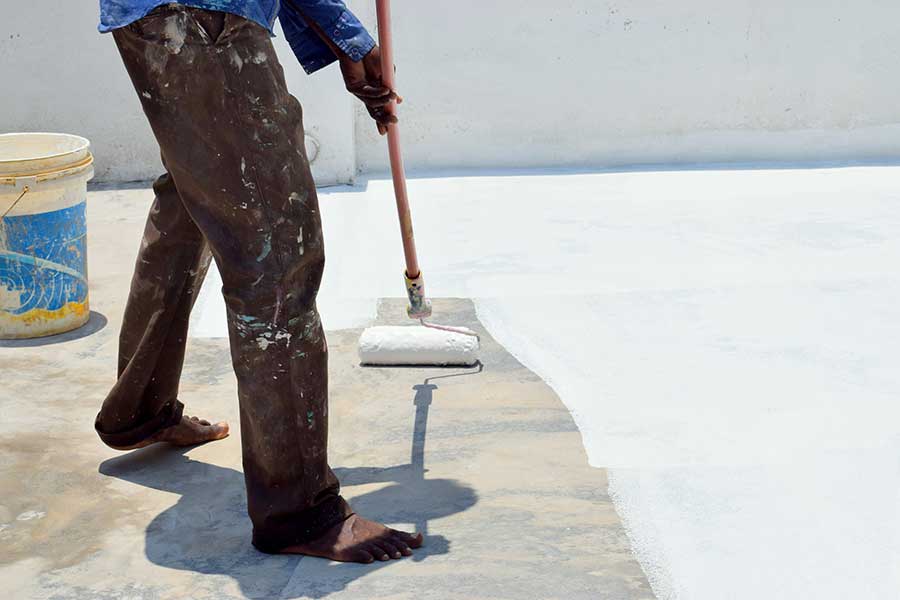 Cool roofs can be made of a specifically designed paint, a sheet covering, or tiles or shingles with highly reflective qualities.

Cost of a Cool Roof

Cool roofs can be made of a specifically designed paint, a sheet covering, or tiles or shingles with highly reflective qualities. Numerous materials including tile, metal, asphalt, and coatings that meet the cool roof requirements mean that cool roofs are available in a wide variety of colors and shades.

Historically, cool roofs have been either white or light in color. Newer roofing materials, such as those designed by CertainTeed, can achieve EnergyStar-qualified levels of solar reflectivity even in darker colors. CertainTeed’s Presidential Solaris and Landmark CL roofing shingles are available in shades of rich grays and browns. All of these colors are rated by the Cool Roofing Rating Council (CRRC) for cool roofs and can be used to comply with the 2016 California Title 24 Part 6 Cool Roof Requirements. Some utility companies offer a rebate for CertainTeed Cool Roof Shingles that can save a homeowner as much as $600 for an average 3,000 square foot roof. And according to CertainTeed, most of the roofs in the world, including more than 90% of the roofs in the United States, are dark-colored.

Many of Polyglass’s roof coatings, such as PG 700 and the PolyBrite line of elastomeric and silicone coatings products, comply with 2016 Title 24 Part 6 cool roof requirements when the white color is selected. Many of these coatings also confer other benefits, such as integrated fire retardant and fungal and algae resistance.

There is a difference between roof coatings and roof paints. “Roof coatings work much better than simple roof paint because coatings are chemically designed to withstand environmental stresses such as temperature changes,” explains Polyglass management. “Roof paint is much thinner and is not intentionally designed for performance.”

Roof coatings are often acrylic- or silicone-based that can be applied over a variety of existing roof types including modified bitumen, EPDM, TPO, PVC, and metal — although multiple coats are typically needed. Using white roof coatings keep the surface temperature within 15°F of the ambient temperature.

Green roofs and reflective roofs are both considered cool roofs. A green roof is a layer of vegetation planted over a waterproofing system that is installed on top of a flat or slightly sloped roof. Green roofs can be installed on a wide range of structures such as parking garages and industrial facilities. Green roofs can be installed on apartments or other residences to provide a place to relax amid some greenery or even grow vegetables. The vast majority of green roofs are installed as a solution to stormwater runoff issues, to reduce energy consumption, and to reduce the effects of smog and the heat island effect. While green roofs lower the need for heating and cooling, they can be much more expensive to implement. Green roofs can stay cool by evaporating water, but they are not rated by the CRRC. 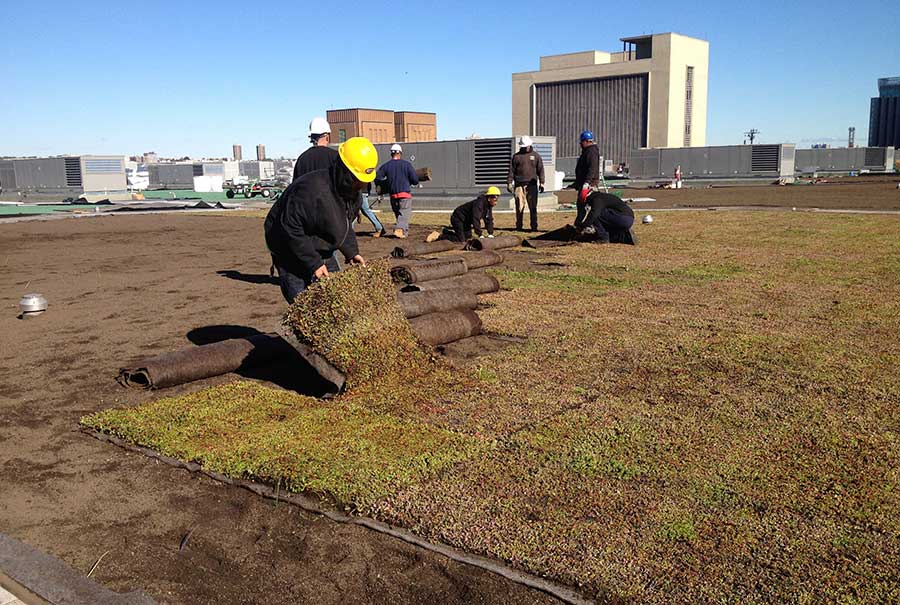 The vegetation for the Javits Center green roof was installed as pre-grown mats.

Reflective roofs are those that are created through the use of roof coatings similar to very thick paint with special reflective pigments that reflect sunlight. These coatings not only reflect sunlight but also protect the roof surface from ultra-violet (UV) light and chemical damage.

Cool roofs deflect some heat gain during winter months, but in general, studies show that cool roofs result in net energy savings, especially in areas where electricity prices are high. There is potential for unwanted glare, especially with large reflective roofs. Light-colored roofing materials may show more grime than other shades. Roofing Contractor points out that one significant disadvantage to a green roof is that it requires irrigation and maintenance such as weeding and fertilizing. And finally, green roofs tend to be heavier than some structures can handle.

Protecting a Foundation from Drought
By Vanessa Salvia
Periods of drought evaporates all moisture from the soil, which creates cavities where water can collect. When rains return, the water will have ready-made channels to run through, and as the soil expands it can lift up the foundation in uneven ways.

Cool Roofing
By Vanessa Salvia
Just as wearing light-colored clothing on a hot, sunny day results in a cooler feeling on your skin, cool roofs can make any building feel more cool on a hot, sunny day. According to Energy Savers, standard or dark roofs can reach temperatures of 150°F or more in the summer sun while a cool roof under the same conditions could stay more than 50°F cooler and save energy and money by using less air conditioning.

Waterproofing Alternative Construction
By Vanessa Salvia
“Natural” wall assemblies like straw bale or cob are similar to traditional wood-framed walls in that they shouldn’t be placed below grade. They require a waterproof foundation and a waterproof roof that diverts moisture and unlike traditional walls are not designed to be waterproof.

Case Study: The Standard at State College
The general contractor for the The Standard at State College high-rise building project needed a waterproofing solution that could be installed quickly and meshed with field requirements. CETCO was the only company with the product portfolio that met the various field conditions present including exposure, large voids, lengthy time frame, and weather.

Be the first to review “Fall 2021 Back Issue” Cancel reply 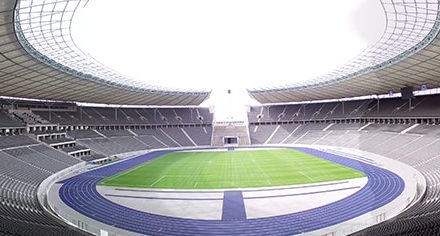 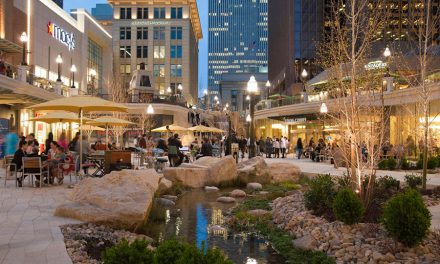 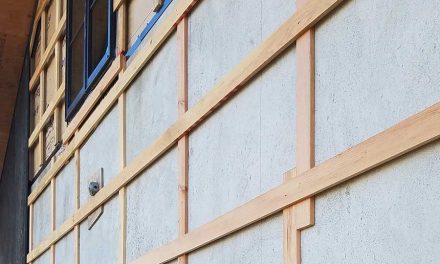