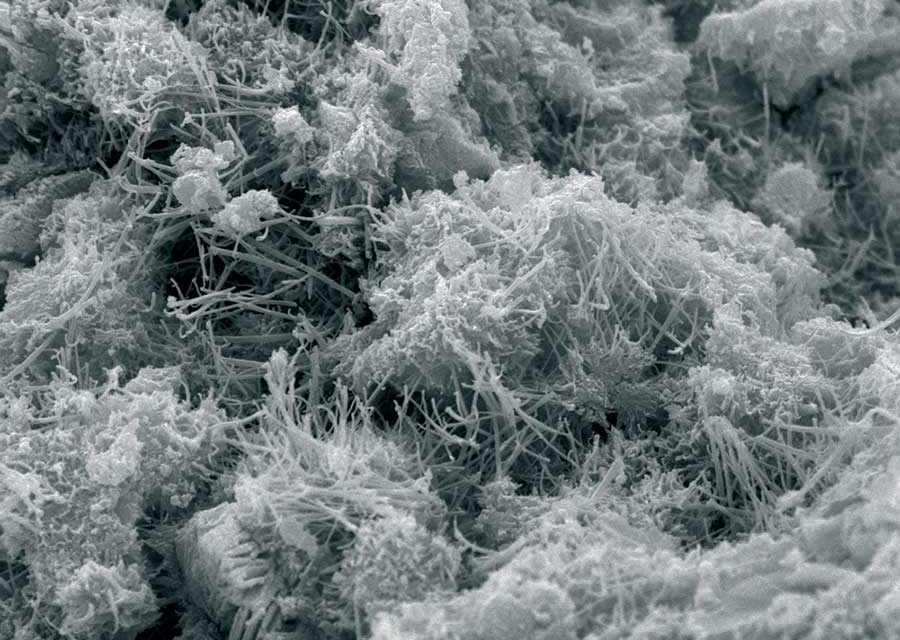 Concrete is a porous material prone to cracking.  That’s why nearly all commercial and residential concrete projects specify some type of waterproofing system.  Usually, a spray-applied coating or a peel-and-stick sheet membrane is used to keep moisture out.

Because it offers such complete, long-lasting protection, integral waterproofing is especially useful in highly corrosive environments and for high-consequence projects where failure isn’t an option. It is extremely useful for blindside work—such as deep foundations and bored tunnels—where the outside of the structure is inaccessible, for complex designs where sheet goods would be difficult to apply, and for potable water tanks and pipes, where water quality is an issue.

For all these advantages, integral waterproofing is surprisingly cost effective. It usually eliminates an entire subtrade from the schedule, and reduces the risk of weather-related delays.  Waterproofing admixtures save so much time and money in the construction process that it’s not uncommon for them to be the most economical option. 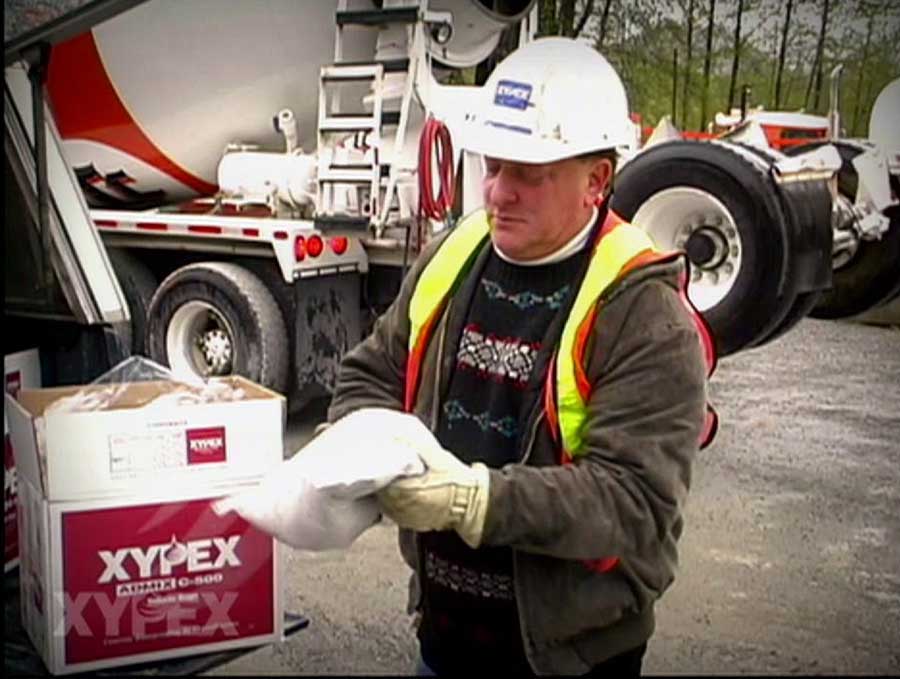 Waterproofing admixtures are usually a dry powder, and can be added at the batch plant, or as shown here, added directly to the hopper of the ready-mix truck in water-soluble bags.

There are more than a dozen different brands of waterproofing admixtures currently on the market, and each is slightly different.  Most can be placed into one of three categories:  densifiers, water repellants, and crystalline formulations.

Densifiers fill the microscopic pores in the concrete matrix to eliminate water infiltration.  These usually contain silica fume as a major ingredient, which has a particle size 1/100th the diameter of an average Portland cement particle. Densifiers react readily with water and also add considerable strength to the mix.  Using silica fume, concrete with compressive strength in excess of 15,000 psi can be readily produced. Densifier-type integral waterproofers are a top choice when high-strength concrete is needed, and also for applications that will be exposed to de-icing salt such as roadways and bridges.

Hycrete, a popular densifier-type admixture, was recently used to remediate a New Jersey bridge overpass and saves tens of thousands of dollars annually.

Water repellants work by causing water to bead on the surface of the concrete.  The surface tension of the water itself keeps it from being able to penetrate the wall.   The active ingredient of these admixtures is usually a stearate or petroleum-based oil. This type of integral waterproofing is especially popular for above-grade work, such as precast cladding panels, but performs just as well below grade and in the transportation sector as well.

The final category, crystalline admixtures,  cause microscopic water-blocking crystals to form in the concrete matrix, sealing pores and hairline fractures.  Of the three types of waterproofing admixtures, only crystalline technology offers self-healing abilities.

Hycrete, a popular densifier-type admixture, was recently used to remediate this New Jersey bridge overpass. It saves tens of thousands of dollars annually.

In the presence of water, the ingredients rearrange themselves to form crystals.  These crystals will grow large enough to physically block the moisture coming through the pores and hairline cracks in the concrete—even years after it was poured—which concrete will inevitably develop over time. By using a crystalline concrete waterproofing method, concrete can self-seal using crystal growth anytime water enters.

Crystalline waterproofing admix-tures are usually composed of Portland cement, silica sand and special chemicals. It is usually supplied as an easy-to-use, dry powder that can be added to the ready-mix truck at the plant or jobsite.  Xypex, one of the most popular brands of waterproofing admixtures, is marketed in soluble bags that have over ten years of field use with negligible reports of clumping or dispersion issues.

Crystalline products are different because they work equally well whether they’re keeping water out, or holding water in, such as in tanks or pipelines. “Integral crystalline waterproofing is perfect for holding tanks and underground construction,” says Les Faure, advertising and promotion director at Xypex. He adds that, unlike many coatings and membranes, crystalline products are so safe they have been approved for use inside tanks that hold drinking water.

Aquafin offers a crystalline admixture as a pourable liquid. “We are the only manufacturer that offers liquid crystalline waterproofing,” says Elena Kessi, president.  “It completely eliminates the risk of clumping, and ensures even distribution of the waterproofing throughout the concrete.”   Their admixture is also available in powder form: water-soluble five pound bags are sized perfectly to be added directly to the truck, or 50-pound sacks for the batch plant. The liquid form comes in six-gallon pails and 250 gallon totes.

Bud Earley, technical director  at Aquafin, says, “Application is as easy as pouring the solution into the concrete mix, allowing it to mix for three to five minutes, and then placing the concrete.  This is a very cost effective and simple solution for waterproofing new concrete structures.”  He continues, “Membranes must be applied correctly in order to perform as designed, and even then, there’s a limited lifespan.  Admixtures last for the life of the structure, and are less labor intensive to install.  There are no worries about bubbles, blisters and adhesion issues.”

His company recently developed a version of crystalline waterproofing for shotcrete, as well.

Kryton is another well-known manufacturer of crystalline waterproofing.  Their Krystol Internal Membrane (KIM) has been used around the world for more than thirty years.  It’s currently being used to seal concrete at the Hudson Yards on the west side of Manhattan, the largest private real estate development in U.S. history.

A fourth brand of this type is TechCrete, sold by Alchemco.  Like many other waterproofing admixtures, it’s a powder that is added to fresh concrete either at the plant, or on the jobsite.  It’s proven crystalline technology has protected concrete structures around the world for over 30 years.  (See case study on pp. 22-23 of this issue).

Mario Baggio, CEO of Alchemco, says, “One of the unique features of TechCrete Admix concentrate is that it consists of about 90% waterproofing material and only 10% filler.  This allows for easy mix calculations, as the ratio is one 22-ounce water-soluble bag for every cubic yard of concrete, regardless of the concrete’s specified density.”

When combined with TechCrete’s 2500 spray-applied waterproofing system and applied by certified installers, Alchemco offers a 30-year manufacturer’s watertight warranty on labor and material.

He continues, “The original idea for this unique product’s development came from a bio-chemical scientist’s fascination with the human body’s ability to continually heal cuts in the skin.  As a result, this system has the ability to seal future cracks as they occur, providing a lifetime of waterproof protection for the steel reinforcement within the concrete structure.”

Gregory Maugeri and William Della Sorte are owners of New England Dry Concrete, one of the nation’s leading applicators of crystalline integral admixtures from Kryton.  They have worked and consulted on thousands of projects, covering all types of commercial construction, including dams, tanks, parking garages, water treatment plants, tunnels, and commercial and industrial buildings.

Maugeri points to Hudson Yards as an example of a recent successful project utilizing crystalline waterproofing.   Hudson Yards is a massive development project currently underway on the west side of Manhattan Island in New York City.  It is the largest private real estate development in the history of the United States.  Just one podium and tower, dubbed 30 Hudson Yards, will offer 2.6 million sq. ft of office space and rise more than 1,300 ft. high.  Fortune 500 clients, including Time Warner Cable and Wells Fargo have already leased space in the building.

Maugeri explains, “30 Hudson Yards is the tallest of the towers on the Hudson Yards megaproject.  The need to build a structure that is as functional as it is stunning was important. The building would have a below grade foundation which would be subject to possible water penetration and flooding. This required a concrete waterproofing system that could fully tank the structure for the entirety of its service life.” 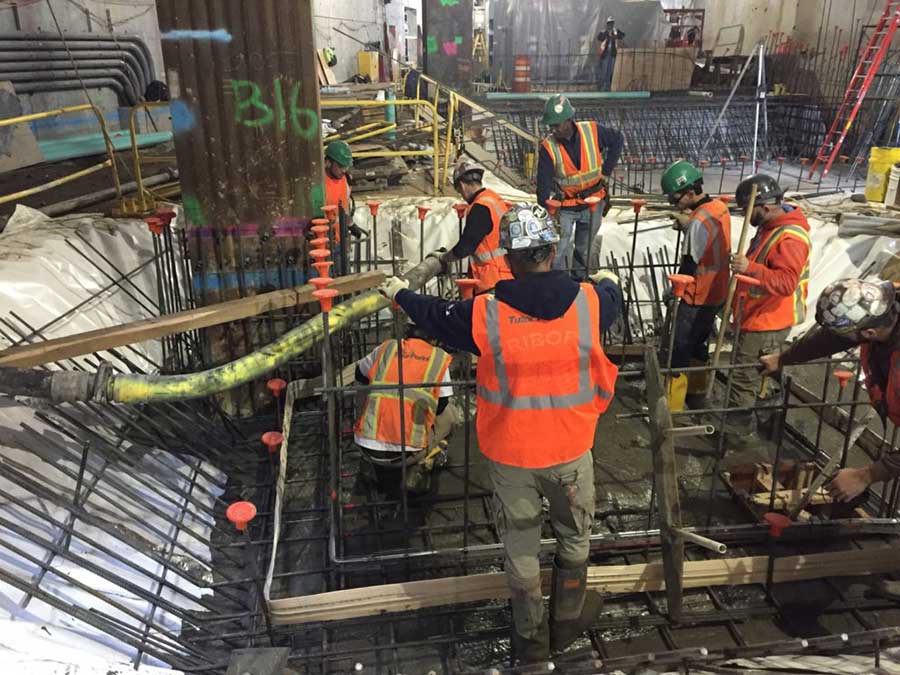 Hudson Yards on the west side of Manhattan is the largest private real estate development in the history of the United States. Kryton’s crystalline admixture was used to waterproof the foundation base slab, elevator pits, and flood retention tank. 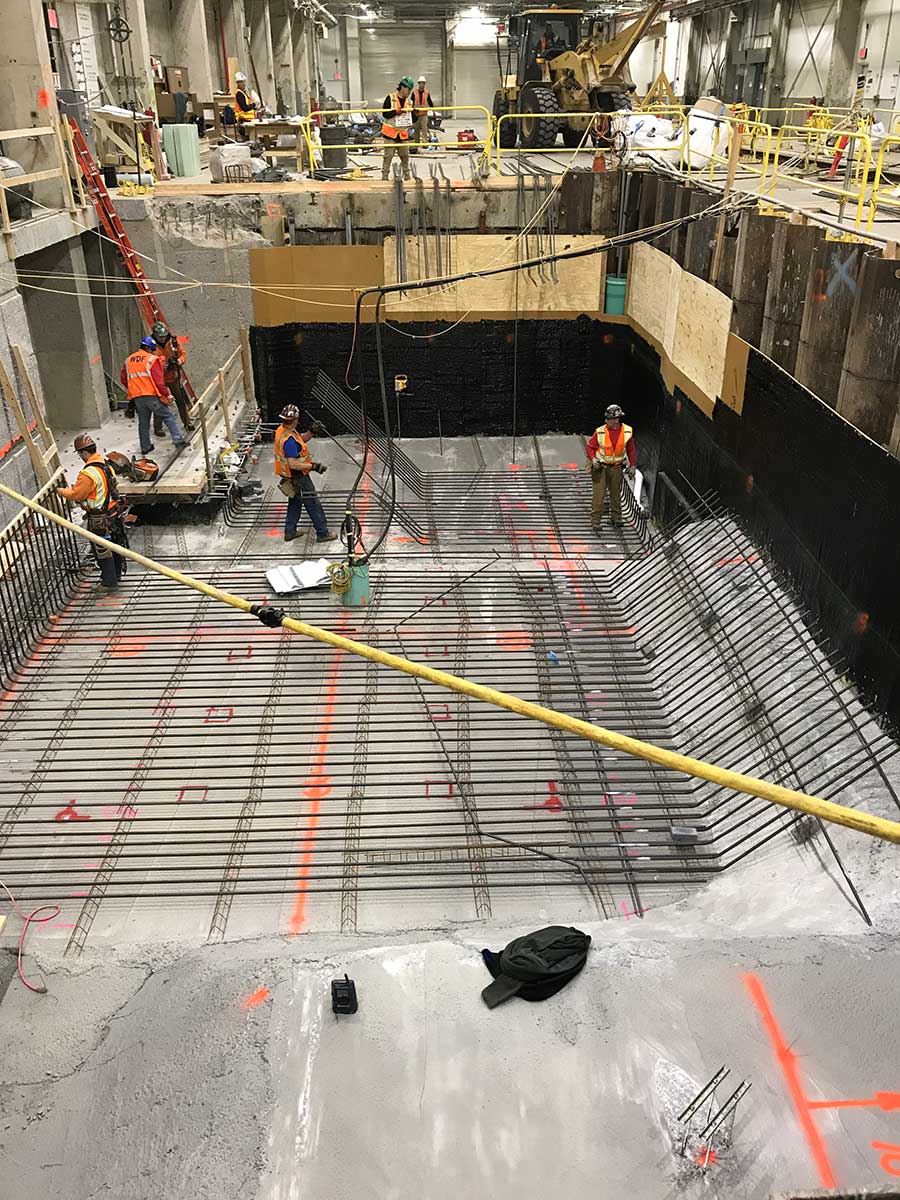 The project began by waterproofing the underwater vaults and pits by adding KIM to the concrete and treating all construction joints and penetrations with Krytonite Swelling Waterstop. These same products were then used for the flood-proofing wall that wraps around the entire perimeter of the building. Finally, the entire exposed walkway surrounding the pier was sealed with a crystalline surface sealant and a topping with KIM admixture was applied.

Maugeri says, “Kryton’s KIM admix has been used successfully  throughout the Northeast.  The design community has fully accepted the use of admixes as an outright replacement for membranes.”  Maugeri notes that the recent changes in the New York City building code no longer specify membranes specifically, but instead allow designers to choose whatever waterproofing system they wish to use, including integral waterproofing.

In September 2017, after ten years of planning and construction, the Wonders of Wildlife (WOW) Aquarium, opened to the public in Springfield, Missouri.  The 350,000 sq. ft. aquarium, adjacent to the world headquarters of Bass Pro Shops, was recently named the best aquarium in the United States by USA Today. 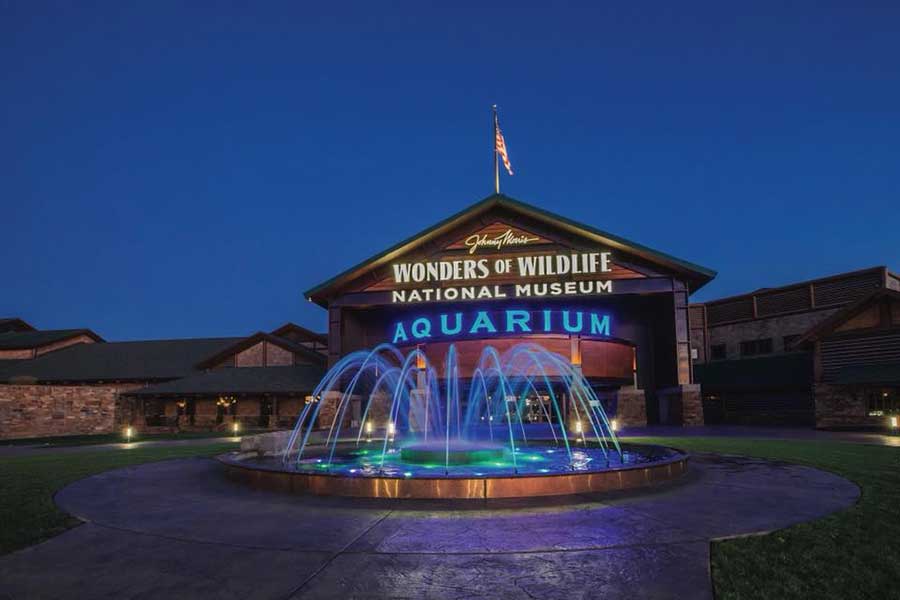 Great Oceans Hall is built around a 300,000-gallon saltwater tank imitating the open ocean, with sharks,  rays and sea turtles.  The second tank is three stories high and features a “bait ball” of thousands of finger-size herring which serve as food for the black-tip sharks who share the tank.  The third—also more than 30 feet tall—imitates the Great Barrier Reef, with all sorts of colorful reef fish and anenomes.

All three of these stunning ocean habitats were built using advanced materials, including high strength concrete treated with Xypex crystalline waterproofing. Xypex was specified by Springfield, Missouri-based BRP Architects, which the firm refers to in this passage from its website:

“The tanks’ designs proved to be quite a challenge. Since all contain saltwater, the project team explored options to achieve longevity in protecting interior surfaces within the corrosive environment. The solution included epoxy-coated reinforcing steel and waterproof additive for the concrete tank foundations, floors and walls.”

Approximately 34,000 pounds of Xypex Admix C-500 was used, dosed via 15-lb. soluble bags. Xypex-enhanced high performance concrete was used in all the aquariums that make up Great Oceans Hall. 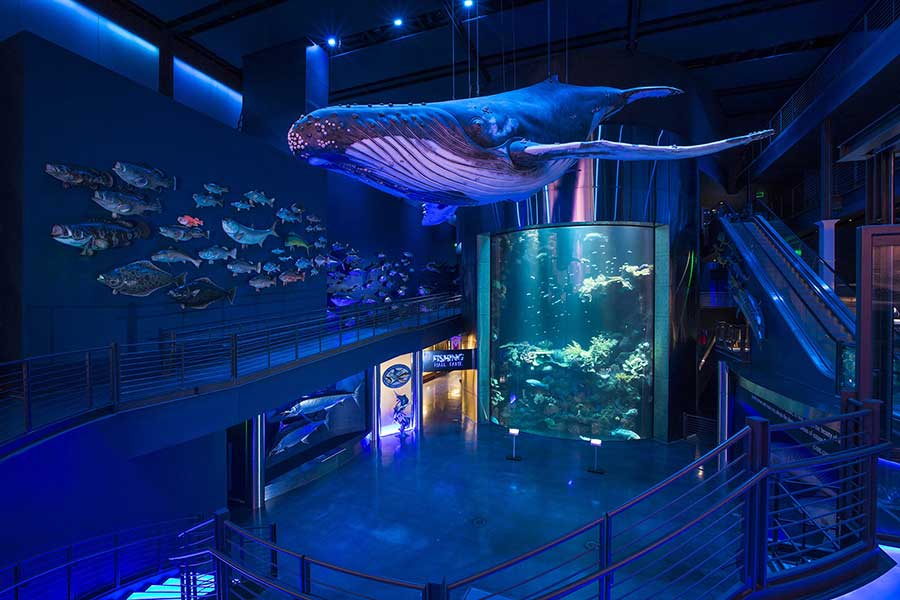 To seal the massive, 40-foot deep tanks at this Missouri aquarium, specifiers turned to an integral crystalline admix from Xypex. More than 2,000 cubic yards of treated concrete was placed.

The Great Barrier Reef tank was cast in place by Carson-Mitchell in 2015, about two years before the grand opening of Wonders of Wildlife. “It was a challenging project for sure,” says Chris Carson, senior project manager for Carson-Mitchell, Inc. “The tank itself is oval-shaped with varying radii and it had two aeration tanks on either side of it, so it was a complex layout in terms of building the concrete forms and reinforcement.”

The depth and volume of water in the huge tank was another challenge. The concrete at the bottom is exposed to more than 40 feet of hydrostatic pressure. 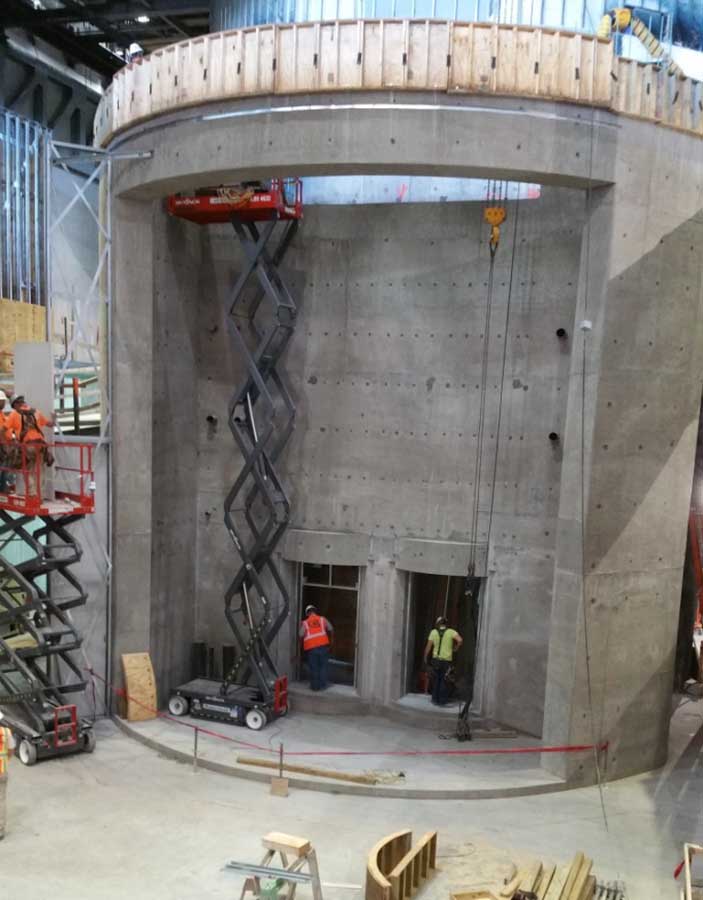 “We have used Xypex crystalline waterproofing on other projects and know that it works very well,” Carson notes. “It’s no surprise that it was specified for these huge aquariums.”

Over the past few decades, waterproofing  admixtures have been embraced by the construction industry, and has a proven track record on projects throughout the world.  Densifiers, hydrophobic solutions and crystalline technologies are all widely used for waterproofing.

Integral waterproofing does have a few disadvantages.  Only crystalline admixes will self heal, and even most of these are limited to cracks of less than half a millimeter.  Regardless of the system chosen, joints, penetrations, and transitions will still need attention.

Unlike externally applied membranes, though, which are best on the day they are applied, crystalline applications become more effective with time. 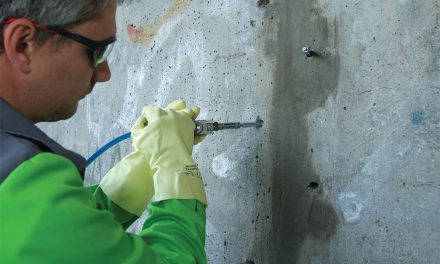 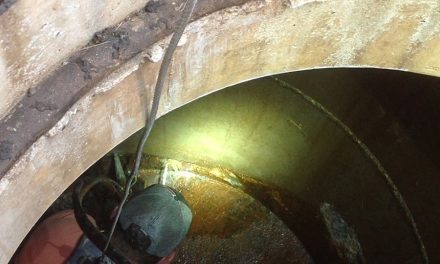 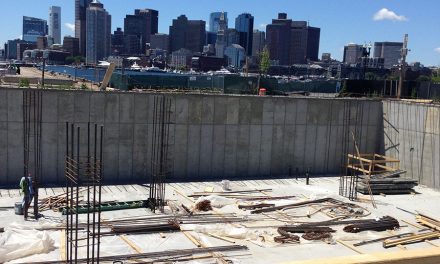 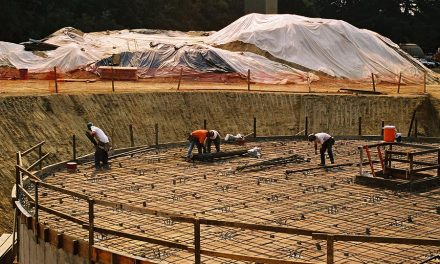