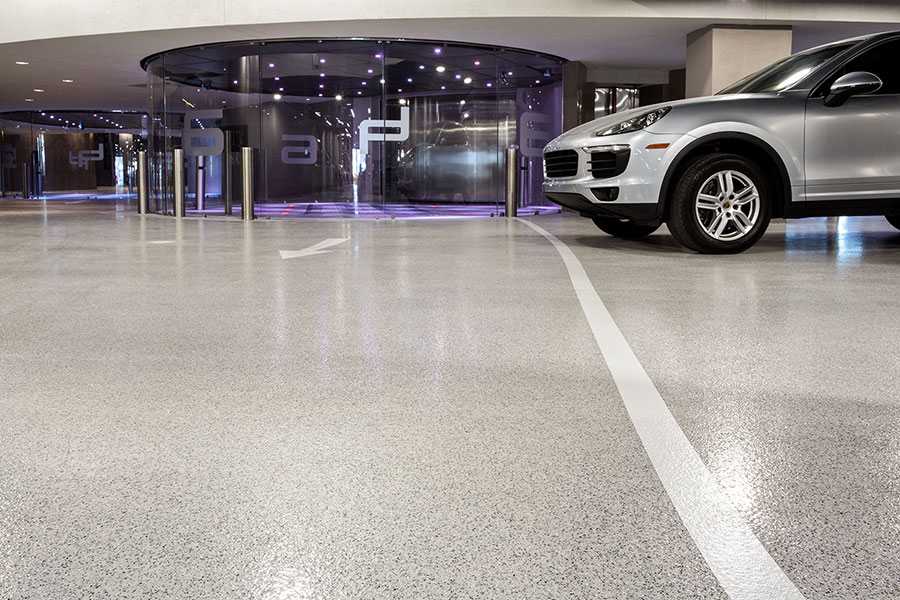 While concrete is the most popular building material in the world, it does have drawbacks. Water is used in the formation of concrete, and water moves through concrete even after it’s cured and feels dry. A solid understanding of how concrete dries and how it conducts water through it is a basic point of education for concrete contractors.

As concrete dries, it forms pores. Capillary pores are formed from the excess water in the concrete mix, and too many or larger-sized capillary pores increase the permeability of concrete.   Capillary pores average 10 nanometers in diameter, and while that seems small, a water molecule is much smaller.

Concrete contains water from the moment it is added to the mixer.  Cured concrete will still contain moisture from external sources such as humidity in the air, rainwater, poor drainage near the slab and of course, flooding or broken pipes. The problem of moisture contamination in concrete is worse wherever cracks are apparent.

The bottom line is that every slab of concrete contains water and always will. The difference in whether that concrete is “cured” properly or not has much to do with how the surfaces on either side of the flooring are treated. If water is able to come through the ground and pass through the concrete, unless a sealer or coating is installed to stop that water,  it will continue to move upward through the carpet, tile or other flooring system that was installed above the concrete substrate.

Due to moisture problems, the Alamodome replaced its polished concrete floor with polyurethane.

There are two main types of coatings—categorized as resinous floor coverings—that are used in moisture mitigation strategy: polyurethanes and epoxies. Typically, a specialty coating product should be considered in situations where the concrete slab contains at least 4% moisture content as measured with a moisture meter.  When choosing a waterproofing floor coating, there’s a perception that either epoxy or polyurethane must be selected and used separately, but in fact they work very well together.

“The use of polyurethanes and epoxies is not one or the other,” explains James Gildea, marketing manager for Sika Corp. in the U.S. “Both technologies will form a mechanical bond with the substrate so which to use is dependent upon what the environment and intended usage dictates. For instance, epoxies are very hard and long lasting with the ability to be applied in a thin coat. However, if additional protection is needed against aggressive chemical usage a urethane layer can be substituted in the coating system as either a primer or a polyurethane cement slurry.”

In addition to polyurethanes and epoxies, a third category is polyaspartics. These coatings are all often used in conjunction, but they each have their clear advantages and “best use” scenarios.

Polyaspartic coatings do provide increased abrasion resistance compared to other options, but they are not suitable applications in situations where a breathable concrete sealer is specified. (Breathable applications could be sealers over exterior stamped concrete, driveways or sidewalks.) Polyaspartics  cannot breathe and should not be used in certain waterproofing applications. However, polyaspartics will adhere to an epoxy substrate if it is appropriately profiled.

Polyurethanes have more flexibility than other coatings. As such, they provide excellent chip and crack resistance along with high scuff resistance for high-traffic areas such as walkways. Sometimes, people will use the terms polyurethane and urethane interchangeably, but they are technically not the same. Polyurethanes are made from several urethanes that interlock, similar to how noodles twist together in a bowl. It’s impervious to water, making it an excellent waterproofing choice. Polyurethanes cure quickly but if they are exposed to moisture while curing, a frothy or bubbly appearance can result.

Epoxies are among the most popular.  Different formulations allow for different thicknesses of applications. For instance, 100% solid formulations can be applied in thicknesses ranging from three mils to more than 10 mils in a single coating. These are available in both solvent-based and water-based formulas.  The thickness builds up protection and durability. If the concrete floor is properly prepped, epoxy will adhere to it very well. Then, a top coat can be applied over it. Epoxies take longer to cure than polyurethanes, but are less sensitive to exposure to humidity during application when compared to polyurethanes.

The percentage of solids refers to the thickness that is measurable after the coating has finished drying. Usually, a percentage of the formulation is solvents, and as this evaporates, thickness is reduced during the drying process. The coating would have to be applied extra thick or the contractor would have to add another coat to reach the specified thickness.  However, 100% solid formulations have no solvents, so they’ll maintain the same level of thickness after they have dried as when they were applied.

Because of this, 100% solid coatings usually require less coats to achieve the desired thickness. Many people choose epoxies because this reduces any between-layer adhesion issues and usually reduces labor costs for application. But again, skimping on surface prep erases many of these benefits.

Sika is the largest manufacturer of resinous floor systems in the world, operating in more than 100 countries. According to Gildea, the biggest users of resinous floor coatings in general are food and beverage manufacturers and life science facilities such as labs, hospitals, pharmacies or clinical research areas that require some sort of clean room. Other popular usages are for electronics manufacturers that need electrostatic protection.

“The big reason why these are the biggest users is really simple: resinous flooring is seamless and you need to preserve a hygienic, sanitary environment,” Gildea explains. “With these flooring systems there’s no harboring points for bacteria or other pathogens.”

That impermeability works both ways. Nothing can penetrate through the floor coating from underneath , and nothing can penetrate from above. The most likely cause of a flooring system that fails prematurely is either the absence of a high-performance urethane topcoat or improper concrete preparation.

Gildea says it’s imperative to examine the environment the building is located in, the issues it’s facing and how the waterproofing must work before deciding on a system. “We don’t just say, you have a food and beverage facility so here are your components,” he says. “We spend a lot of time designing the system. There’s a significant amount of moisture that can travel through concrete and that needs to be addressed. So you either have to seal it so the moisture can’t penetrate through or you put a coating on it so that it can breathe, so it can pass through. We spend a lot of time with that slab, with the ambient temperature and we take into account what it’s being used for.”

Gildea says that consumer demand is shifting towards more eco-friendly products, and the floor coating industry is responding.  Sika has worked toward making most of their products water-based instead of solvent-based. Their coloring agents now use castor oil as a delivery system rather than petroleum. “It’s completely natural, there’s no VOCs, they simply don’t exist in it,” he says. “Everything is very low odor and quick curing but you’re not giving up any of that long-time durability that these flooring systems are known for.”

“The overall driver I think is that the people who are writing specs are trying to adhere to green building technologies,” he summarizes. “They’re really looking for things that are extremely low VOC content, with low or no odor. They want to maintain air quality standards and get away from anything that’s solvent based or has any nasty chemical characteristics to it.”

One recent project Sika took on was at the Alamodome in San Antonio, Texas. In preparation for the spring 2018 Final Four Men’s Basketball Tournament, the city of San Antonio spent $60 million to renovate the facility. These renovations included replacing 140,000 sq. ft. of polished concrete floor with the Sikafloor DecoFlake and PurCem flooring products. 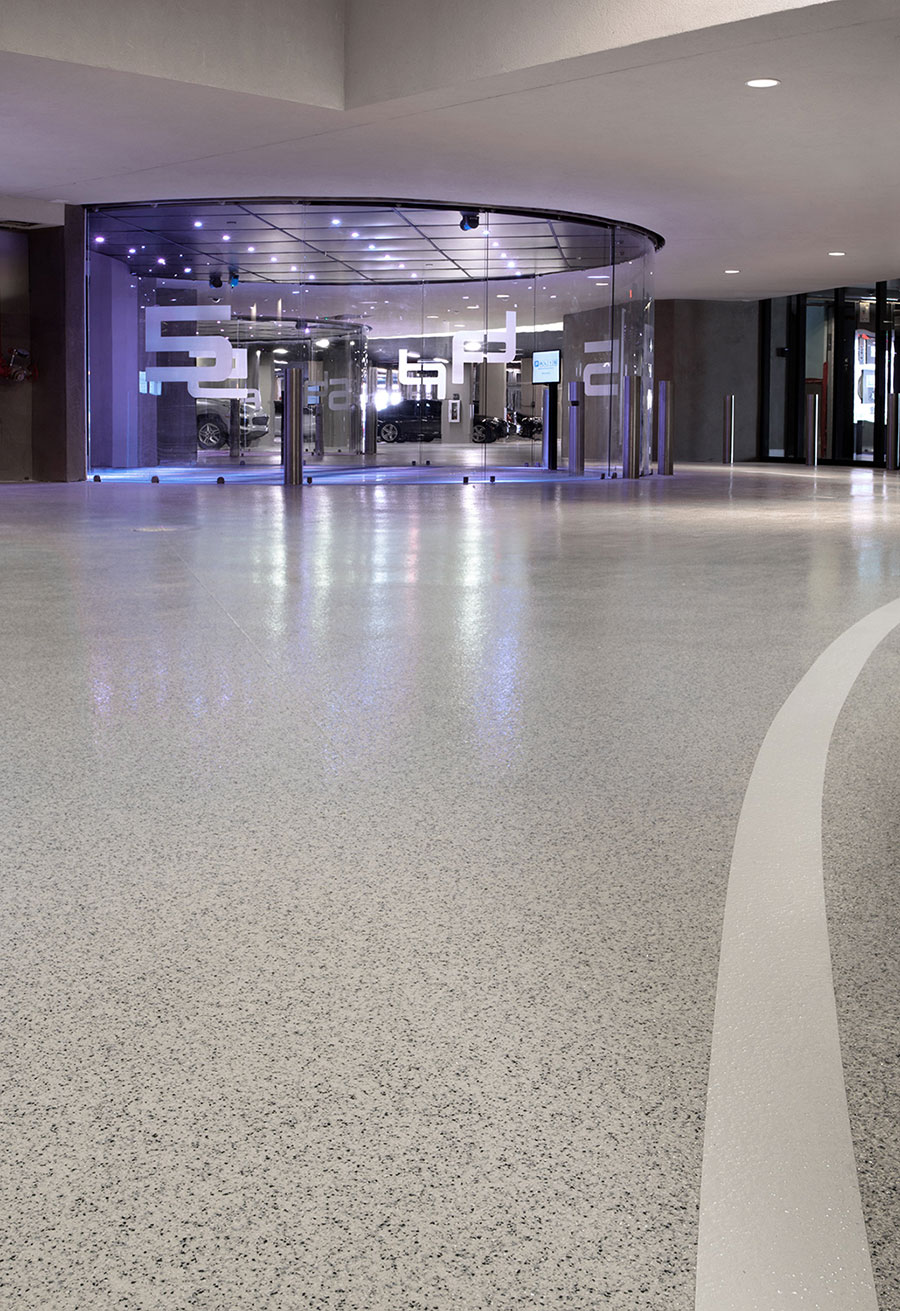 A polyurethane floor system with vinyl flakes looks great while being tough enough to be driven on. It’s topped with a long-lasting aliphatic urethane for protection.

“The previous floor wasn’t giving them the look they wanted and it had a moisture problem,” says Gildea. “We ended up coming in and replacing the flooring while the facility was still open. It was a master work of choreography.”

Another interesting case study that combines durability and visual appeal was the Porsche Design Tower in Miami Beach. In this high-end high-rise inspired by the sports car, residents can actually drive their cars right into their apartments.

At the Alamodome, 140,000 sq. ft. of polyurethane floor coatings were installed in preparation for the 2018 Final Four Basketball tournament.

This one, Gildea says, also used a polyurethane system with vinyl flakes, but they had the added requirement of needing to remain good looking while being tough enough to be driven on. “We put a very long-lasting aliphatic urethane on top to protect the acrylic coats underneath,” he says.

Within the residential space, the two most common areas for concrete floor coatings are garages and basements. Both locations face the same common enemy: moisture.

For residential applications, the beauty of epoxies and polyurethanes is that they look as good as they work.

“You can make these coatings a solid color, you can use different aggregates such as synthetic stone, quartz or colored vinyl flake, even an ultrafine metallic powder for a pearlescent effect,” says Gildea. “So when you’re designing the decor of your building there’s really no limit to it. Whatever you come up with we can compliment it and enhance it.”

Both polyurethanes and epoxies make great floor coatings. They both provide premium protection against wear and tear, oils, chemicals, stains and water. As with anything waterproof-related, the important thing is the materials that are chosen and the way they are applied as part of a whole system, to either control moisture or allow moisture to pass through.

For both a residential building or a commercial enterprise, the bottom line on waterproofing a floor is that it is long-lasting, affordable and effective.

Blindside in Hollywood
Single Ply Roofing: A Primer
Options for Floor Coatings
The How and Why of Enclosed Crawlspaces

Blindside in Hollywood
With a seismic fault line running through the property and a multi-level water table, this apartment project in Southern California required unique below-grade waterproofing.

Options for Floor Coatings
By Vanessa Salvia
Epoxy and polyurethane formulations are both used to seal floors.  Each system has advantages, and can be used successfully if properly installed.

The How and Why of Enclosed Crawlspaces
By Lindsay Brecheisen and Jonathan Coulter
Over the past decade, enclosed crawlspaces have become “best practice.”  They improve efficiency and air quality, and are often a profitable retrofit options for waterproofing contractors to add to their list of services.

Be the first to review “Fall 2018 Back Issue” Cancel reply