Water and moisture in the basement will considerably reduce the value of a home. That’s because moisture allows mold to grow, and the musty smell is not only  unpleasant, but can also cause health disorders.

Leaky foundation walls in commercial structures cause similar damage. In extreme cases, liquid water will actually be seeping or flowing into the building through cracks and penetrations in the concrete wall.  The cause is usually failed waterproofing or an inadequate drainage system, which allows hydrostatic pressure to build up on the outside of the structure.  These layers are sometimes damaged during construction, or leaks can be caused by changes in environmental conditions or cracks in foundation.

The usual approach is to excavate the area where the leaks are located and repair the waterproofing. Positive-side waterproofing is an effective and proven solution. In some cases, however, it’s not possible.  Leaking floors, for instance, are almost always inaccessible from the exterior.

Zero-lot-line construction, the depth of the foundation, and other constraints often make positive side waterproofing impossible.   Fortunately, solutions have been developed that allow contractors to confidently and permanently seal active water leaks from the inside (negative side) of the structure.

Because the cost of waterproofing a leaking basement from the inside is usually much less than the cost of positive-side excavation and remediation, these techniques are making their way into the residential sector.  Homeowners appreciate the lower cost and reduced hassle and  appreciate keeping lawns, driveways, and landscaping in place.

Roman Mahles, technical specialist at Koster American, says, “Negative side capillary coatings can be beneficial in some situations.  However, it is often best to take a systems approach. It is important to seek recommendations from professional engineers, consultants, and manufactures to determine the best approach to remediation.”

Flowing water on the surface of the substrate can be a problem for materials with long set times, because they can be diluted or even washed off the surface by flowing water.

The standard method is to inject a polyurethane foam first to stop any flowing water and then, in a necessary second step, to inject an elastic solid body resin.

Boreholes are drilled into the crack from alternating sides in a 45° angle towards the crack center. Since the course of the crack below the surface is not known, this procedure ensures that at least every second borehole transects the crack. The polyurethane resin is injected into the boreholes with a high pressure injection pump via special valves, so-called injection ports, which are installed in the boreholes.

Pat Burchett at NCFI Polyurethanes says there are a range of foams, from single component urethane grouts to plural component crack injection systems, and the correct material depends on the application and whether or not water is present.  (Some injection materials need water to react whereas others do not react if water or moisture is present.)  Polyurethanes are almost always recommended over epoxies because they stay permanently elastic and bond well to concrete and brick.

Cement-based crystalline coatings are often part of a system-based approach to stop active water leaks.  Marketed by a variety of companies, the materials are applied as a coating or grout, but they do not rely on surface bonding to achieve waterproofing. Instead, the reactive chemicals in the coating migrate through capillary tracts within the concrete to become an integral part of the concrete mass and seal it against moisture.  They can withstand enormous hydrostatic pressure even when applied to the negative side of the wall.

Mahles, at Koster, says, “One advantage of crystalline coatings is that they are self-sealing and breathable. However, active water leaks must be stopped prior to application.”

A few companies, including Koster and Kryton International make “super fast set” powders that can stop flowing water within seconds.  Koster’s KD Blitz is simply pushed firmly against the active leakage—without mixing beforehand—and reacts immediately to stop the flowing water. Kryton’s Krystol Plug is another  fast set grout that can be used to stop even the most extreme leaks.

Kryton’s Krystol Leak Repair system works for everything from emergency repairs of active leaks on up to a full waterproofing restoration. The system uses cement-based grouts for strong, durable repairs and contains a unique formula of crystalline waterproofing additives.

Jeff Bowman, technical manager at Kryton, says the system can be installed in very damp conditions and even against very high water flows. “With a little experience an applicator can stop gushing leaks that seem impossible to manage. The system results in a strong, durable repair that is effective against high water pressure and can form the basis for further waterproofing work.”

It was used on a full scale foundation waterproofing repair at New York University’s Langone Medical Center (NYULMC)  after Superstorm Sandy revealed significant vulnerability to water ingress. The repairs were undertaken by long time Kryton partner and distributor Dry Concrete LLC, in partnership with NYULMC, consulting engineers and construction management. This is the third such project undertaken by NYU Langone.  Greg Maugeri of Dry Concrete has been working with them and other groups to waterproof and protect their concrete infrastructure in the wake of Superstorm Sandy.

The job began by chiselling out the leaking cracks and honeycombed concrete.  Bowman says, “It may be tempting to apply the system directly over the leak, but chiseling down to sound concrete is the only way to properly make a true repair.”

A waterproof slurry coat with crystalline waterproofing was used to seal the floor of NYU.

In this case, active leaks were stopped with Krystol Plug, the “fast set” emergency repair product. Then, those cracks and additional non-leaking cracks were repaired with Krystol Repair Grout—a fiber reinforced product that contains a three-stage shrinkage compensating mechanism to prevent cracking—to guard against future leakage. Once the cracks were addressed, the full slab and wall area was coated with Krystol T1 and T2, a waterproofing slurry coat containing the crystalline waterproofing.

With the waterproofing repairs complete, the foundation was finished by pouring a self-leveling topping to provide a smooth and level floor surface.

Maugeri recommends pouring all concrete with Kryton’s crystalline additive to make it waterproof from the start.  “However,” he says, “we do have a solid system for protecting and improving vulnerable concrete.  Older foundations can be remediated with our repair line. That at least give owners a fighting chance to protect their infrastructure.”

Bowman, the technical manager, says, “Compared to the many resin injection repair systems available, the Krystol Leak Repair System has several features that benefit contractors: With a grout based repair system, leaks are chipped out and repaired directly so the installer can see what they are dealing with. The guesswork in drilling injection ports is eliminated and so is the risk of new leaks developing through the ports themselves. There is also no risk of damaging the concrete due to spalling from injection pressure.”

He adds, “Some injection resins are very flexible and these remain a good option for cracks that experience movement, such as cracks in suspended parking slabs.”

Injection resins were used to solve water leaks on two different below-grade walls in the Empire State Building in New York City.  One was a 36-wythe brick wall and the other concrete block.

Mahles, the technical specialist at Koster, says that even though the company has a full line of crystalline waterproofing products, for this job they chose a polyurethane grout because of the porosity of the CMU blocks and lack to free lime that is required for capillary crystalline growth. They used KB Pur Gel, a water-activated polyurethane, to fill the voids and stop the leaking.  Depending on the amount of water added, it forms a highly elastic, waterproof foam hydrogel that, even at dilutions of 1:10, is still resistant to pressurized water.

Injection ports were installed every 16” on center.

Polyurethane grout was used to stop leaks below the Empire State Building.

Once the injection was complete, the wall was surfaced with their NB 1 capillary crystalline coating, to create a hydrophobic negative side waterproofing layer. 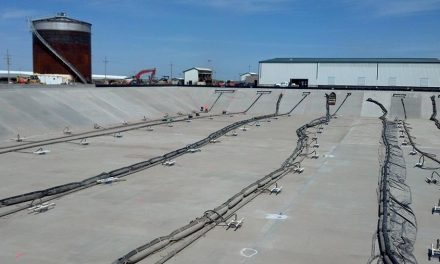 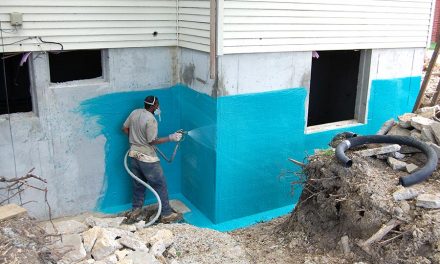 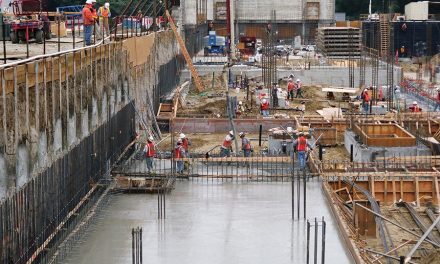