An increasing number of homeowners are choosing to upgrade their basements.  Whether it’s for use as an in-law apartment, an expanding family, a recreation room or married kids coming home, the demand for basement living space is strong.  Many waterproofers are taking advantage of this profit opportunity to create comfortable, well-lit living spaces that feel just as inviting as their above-grade counterparts.

The key is to use the right combination of waterproofing, dehumidification equipment, and other technology.

Brett Oakley, CEO of Mar-flex Waterproofing & Building Products, says, “We’re seeing a change in how basements are finished.  Builders need to be aware not only how to make the home waterproof, but how to make it livable and consider issues like accessibility and lighting.”

Oakley continues, “So many people buy homes with unfinished living spaces, and they don’t understand the safety issues.  Kids become teenagers, they move downstairs for a little more space, and no one thinks anything of it. But egress is one of the essential components of any basement living space.”

“I was a fireman for 27 years,” he continues.  “Moisture is one issue, but life is more important, which means every basement needs to have egress windows.  Every contractor needs to educate customers in this way.  I don’t understand how homeowners will spend $50,000 on a basement remodel and fail to put adequately sized windows and egress window wells in.”

Oakley notes that not only are these required by code and common sense, but they also make the space much more inviting.  The increase in natural light, he says, removes the dark, claustrophobic feeling that many old basements have.

Ron Greenbaum, a Ohio-based waterproofer known as “The Basement Doctor,”  says that after life/safety issues, structural concerns are the next priority.  “Prior to finishing a basement, all structural issues should be addressed as they will not be able to be seen or inspected once the wall is covered,” he says.” If the wall shows any signs of inward movement, it should be supported to help prevent movement in the future.”  This can be done using traditional steel I-beams or modern carbon fiber strapping.

Major cracks may need to be injected with epoxy (for structural strength) or polyurethane grout (to prevent water ingress) as well.

Greenbaum continues, “ In order to have a truly sound and inviting basement all the issues must be addressed instead of putting a temporary Band-Aid on them.  You can’t just put up a wall and think that by hiding the water and cracks, they’ll just go away. A livable basement needs to be safe.”

Oakley says that while it may be costly to fix an existing home, it’s often not as expensive as homeowners fear.  “For a severely leaking foundation, you’ll need to bring in heavy equipment and re-do the waterproofing and drainage.  But often, if it’s just minor leaking, it’s possible to cut in an interior drain tile that sits on the footing, between the slab and the foundation wall, that will get that water out of the living space.”

To get the most out of the upgrade, begin by drawing out the floor plan, and then determine the best way to utilize the space.  Figure out which windows will need to be enlarged or if new egress windows need to be cut into an entirely different area of the wall.  Then, add artificial lighting.

“The proper amount of lighting is so important,” says Greenbaum.  “We typically install one can light for every 36 sq. ft. or so when finishing the basement.” He recommends allowing as much additional natural light into the basement as reasonably possible, using energy efficient windows and window well enclosures which are designed to reflect light into the basement.

Oakley prefers the polyethelene window wells, as they don’t rust or corrode, and are there for the life of the home.  “Fiberglass is not a bad product,” he says. “They perform well and have a really nice look to them, but some seem to be on the thin side.”  Oakley is of the opinion that the gavanized metal wells, whether white or shiny, are not as appealing.

Whatever course is chosen, Oakley advises, “Make sure it’s done according to code to ensure you’re adding value to the home.  Basement remodels can often be done quite economically, because the space is already there.”

At some point in the process, waterproofing must be addressed.  Greenbaum states, “Most basement water problems are the result of improperly maintained exterior items such as gutters, downspouts, and grading.”

Oakley agrees.  “ It’s not any one thing, but it’s a whole system that works from the footer up, and you can’t cut corners.”

It starts with drainage tile or perforated pipe installed along the footing.  Oakley says his rule of thumb is the lower the better.  That water must be taken well away from the structure.  He continues, “ I prefer a positive drainage system over sump pumps, but in some areas, like the Midwest, sump pumps are always necessary.”

He feels that using drainage board only or dampproofing is a major mistake. “You want a good waterproofing seal from the top of the footer to the top of the wall.”  He typically recommends a solid rubber product, but says his company will also use emulsion and solvent-based systems when they’re better suited to the application.

Greenbaum says that in a few cases, he’s discovered that basement water problems were unrelated to groundwater, and instead came from plumbing leaks and water heaters.  He recommends installing drain pans under these units that  drain off to a drain or sump pump system.

“By using a great waterproofing product, and a great drainage product, you’re preventing a lot of potential problems,” Oakley says.

Once liquid water is addressed, the plan should deal with water vapor as well.

“It’s critical that when a basement is in the ground, it has a good dehumidification system,” says Oakley.

Karl Osman, sales manager at SantaFe/ThermaStor, says, “Basement finishing is an extremely fast growing market right now, and when you talk about making that space livable, dehumidification is a major part of that.”

He continues, “Due to the cooler temperatures down there, it will naturally have higher humidity levels, even if the waterproofing is functioning perfectly.  Many homeowners will spend $8,000 to $15,000 on finishing the basement, but if you don’t control the humidity, everything you just put in there is at risk.   That unseen water is soaking into furniture, toys, corroding electronics, and creating conditions for mold, mildew, and the pests that are attracted to humidity such as bugs and rodents.”

Greenbaum recommends keeping the relative humidity below 50%, and Osman agrees.

Some recommend keeping it even drier, but Greenbaum cautions, “You do need some relative humidity, so don’t take it too low. Really low relative humidity can also cause static electricity.”

“About 60% humidity is where mold growth really takes off,” Osman says.

As to the best method of addressing water vapor, Oakley admits, “Every single basement is different.  Whether the walls are block or poured concrete, insulation, climate, waterproofing; it all plays a role.”  He continues, “Before you do anything, address safety issues first.  Then address the moisture problems.”  He finishes basements with enough air space behind the wall to create air flow and ventilation to ensure mold growth doesn’t occur.

The simplest solution is a stand-alone dehumidifier.  These come in different sizes to accommodate the variety of room volumes and moisture levels.  Osman says, “These can be set up in multiple ways.  If it needs to be out-of-sight, it can be located in storage closet or utility room and ducted to the living space.”

These run on regular 120-volt power, and can be plugged into any outlet, although Osman recommends a dedicated circuit with a GCFI outlet.

To minimize maintenance, he also recommends attaching a gravity-fed hose that drains into the sump pit, floor drain, or HVAC water removal system.

The Santa Fe dehumidifiers, like most quality units, have an in-unit humidistat that will automatically activate the machine when humidity levels rise.

Greenbaum recommends a dehumidifier than doubles as an air purifier.  “It regulates the relative humidity and cleans the air down to one micron,” he says.  “These units remove dust, dust mites, mold, and other airborne toxins.”

Greenbaum adds, “Even if you don’t plan on living there, it may be worth looking into a upgrading.  As much as 50-60% of the air that you breathe in the upper levels of the home comes from the basement and crawlspace. You cannot shut the door and ignore these spaces. They will impact your quality of life whether you ignore them or not.” 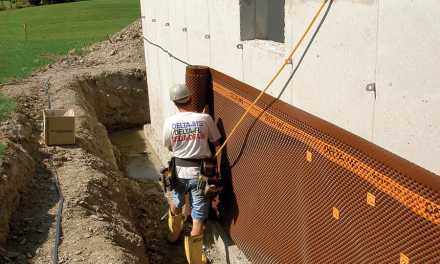 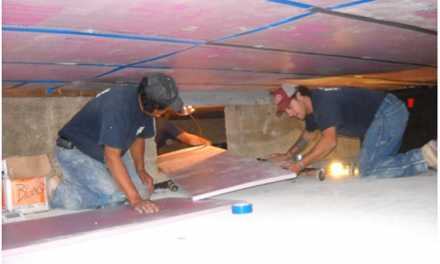 Drying Out a Waterfront Crawlspace 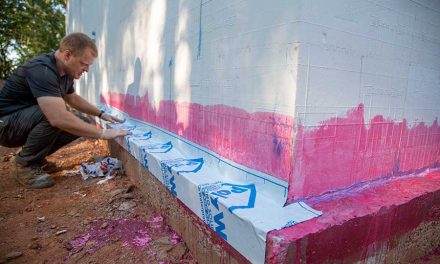 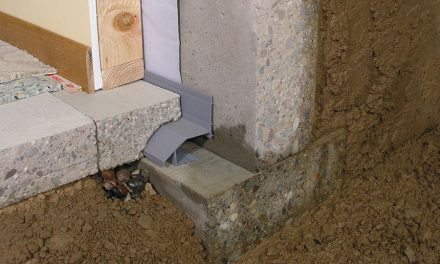