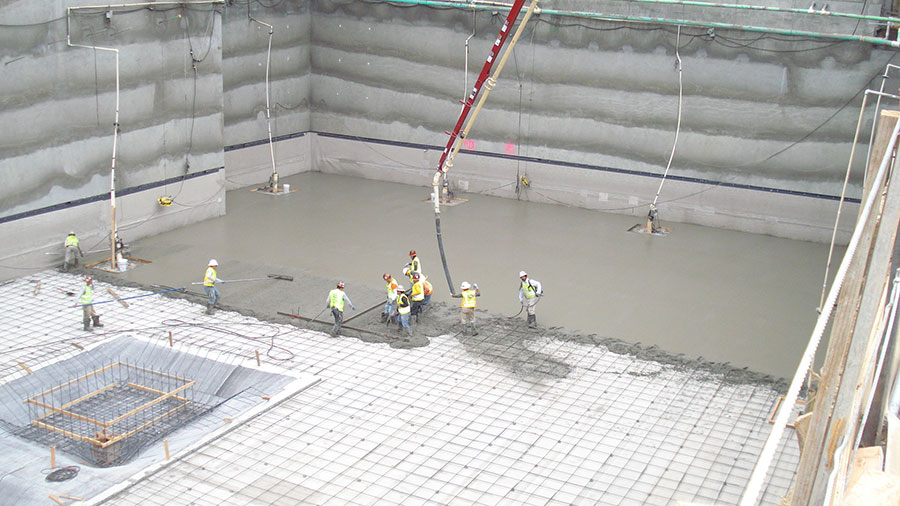 Complex scheduling, differing substrates, and intense hydrostatic pressure are just a few of the challenges associated with deep foundations.

When commercial construction extends far below grade, the challenges of waterproofing increase exponentially.  Scheduling is complex, hydrostatic pressure is intense, and the systems are often installed using blindside techniques.

Dave Polk, president of Epro Solutions, explains, “Deep foundations are becoming more common across the U.S., and the reason they’re going deeper is because cities are running out of room.  For example, urban apartment buildings are typically built on top of the parking area, and the capacity of the below-ground parking structure limits the size of the building that can be built above it.”

High-rise apartments, tunnels, underpasses, and parking garages are just a few applications where designers and installers must create solutions.

Careful detailing at joints and penetrations is essential, like this junction between the underslab membrane and the vertical waterproofing applied over sheet piles.

Stacy Byrd, National Products Manager at CETCO, agrees that perhaps the biggest challenge is the schedule and complexity.  “These jobsites will have several trades doing multiple operations in the same area, all trying to get done at the same time,” he says.

“It’s not unusual to have waterproofers on the job while excavation is still underway,” he adds, “As soon as the waterproofing is installed, the steel guys are setting up rebar right behind them.  Often, other crews are already pouring concrete.  It doesn’t happen on all jobs, but it’s becoming more common because time is money. In some cases, they’re installing in the waterproofing before they’re even sure what the conditions are on the other side of the site.”

“If  the general contractor is not pouring concrete, they’re not progressing on the job; so the waterproofer doesn’t have sole access to the area, and crews are expected to get the job done while multiple other construction operations are happening around them.”

Other than the excavators, the waterproofing contractor is the first on the job. And until the concrete is placed, jobsite traffic is going back and forth over the membrane.  “You will have workers, job boxes, even heavy equipment on whatever product the crews just installed,” says Byrd.  Waterproofers must be prepared for the fact that the membrane might be damaged by the subsequent trades.

Careful workmanship is required as repairs can be extremely costly.   “If it is damaged or mis-installed,” Polk says, “there might be 18 inches of concrete with three separate mats of rebar in the way of any repair.”

It’s becoming common to mechanically fasten cementitious board over the lagging to create a better surface, eliminate gaps, and create a smooth transition between the lagging and soldier piles.

As foundations extended deeper below grade, soil conditions change, and may require different soil retention systems.  Byrd described a job in Canada with soldier piles and lagging on the upper part of the excavation, followed by exposed bedrock that had been drilled and blasted.  On the bedrock, the wall was stabilized and smoothed with a layer of reinforced shotcrete.   On another project, the lagging was so irregular at the bottom of the shoring wall that they applied shotcrete over the lagging to provide an acceptable substrate for installation of the waterproofing system.

Obviously, a good waterproofing system must work reliably over a wide variety of substrates.

Polk says,  “The deeper you go, the more likely it is that you’ll encounter water tables or perched water.  Tie-backs and walers are especially prone to leaking, and require special attention.  In some cases, these walers are removed as the waterproofing progressed up the wall, but often, especially at lower levels, they must be detailed and waterproofed around.  “These conditions can be difficult for all waterproofing systems,” says Byrd, “both spray-applied and sheet products.”

Polk says another solution he’s seen is boxing out all the tiebacks.  In this system, the waterproofing is run four to six inches into the box-out area.  After the concrete is in place, they’ll go back in and de-tension the tiebacks, then inject the area with bentonite or polyurethane foam before permanently filling the box with concrete patch.

Deep foundation jobs feature complex schedules and congested jobsites. On this site, the waterproofing and steel is in place before the excavators have finished.

In addition to having to work with shotcrete, one-sided forms, soldier piles, sheet piles, lag walls, tie-backs, soil nails, blasted rock, grade beams, piles, caps and so on, Polk points out the uncertainty of some jobs.  “Sometimes, you may not know what you face because the excavation isn’t finished when you begin work. Soil reports can sometimes miss conditions, like if a soil nail punctures a lens of perched water. Or when a soldier pile hits an unanticipated boulder and twists, which will require generating a waterproofing detail for that specific situation.”

Byrd notes, “One problem is that often the shoring contractor really is not concerned with the impact of the shoring wall on the installation of the waterproofing system.  The waterproofing is not part of his responsibility or contract.  There are some projects where consultants get involved and there’s better coordination between the trades, but often it’s left to the waterproofer to find a solution.”

Despite the wide variety of jobsite conditions and challenges, Polk and Byrd say following a few key principles make this type of project go more smoothly.

One of the most crucial issues is getting the sequencing right at the pre-construction meeting.  Polk recommends double checking that solutions are in place for dealing with any water that’s encountered.  A construction dewatering systems is almost always needed.  “This is typically the responsibility of the GC,” he says.   In some cases a permanent dewatering system is installed when the building is completed.  In areas where a high water table exists, the design will typically call for “bathtub waterproofing” and let the building in as much as 15 or 20 feet of water.

Byrd says job-specific details are also essential.  “They must be drawn up for the specific conditions that will be encountered at that specific jobsite,” he says.  “It’s not like a basement where it’s a nice smooth, concrete surface and waterproofing and drainage can be applied after the concrete foundation wall has been constructed.  Very few deep foundation projects are over-excavated.”

These details are typically drawn up by the manufacturer, or in consultation with the manufacturer, then submitted to the designer for approval, before being forwarded to the field for installation. “You don’t want installers making field decisions on the site that will affect the performance of the membrane,” he explains.  “So the manufacturer has to be extremely responsive to the design team and provide the information they need in a timely manner.”

Byrd says most waterproofers prefer front lagged timbers  as a substrate, because it’s easy to adhere to and relatively smooth.  He adds, “consultants are specifying cementitious board to be mechanically fastened over timber lagging.  It creates a smooth surface, eliminates gaps between lagging boards, and smooths the transition between the wooden lagging and metal soldier piles.”

There are a wide variety of different products in the marketplace, made of different materials, that provide a quality, reliable waterproofing system for this type of work.  The following guidelines are good advice in selecting a system:

Second, choose a system that has good manufacturer support to help with details.  “So many construction issues show up on these jobs that require specialty details,” he says.

Epro markets spray-applied and composite blindside systems that have been used with exceptional results.  “The deepest we’ve ever done is eight stories underground,” says Polk.  “We started at the bottom, and they built each level as they went up.”

Byrd, at CETCO, says his company makes a few different product lines for deep foundations.  “In Southern California, where there’s water and methane, CoreFlex 60 is commonly specified and installed.  The membrane overlap seams are thermoplastic welded, and the membrane is durable enough to be used in conjunction with structural shotcrete foundation walls.” CoreFlex 60 can be used on both the shoring walls and underslab to form a continuous waterproofing system.  It consists of a 60-mil thick, reinforced PVC sheet with an Active Polymer Core (APC) layer integrally bonded.  After installation if water breachs the PVC, the APC layer will swell to seal the water ingress.  The APC is lighter, less permeable, more expansive, and more resistant to contaminants than bentonite.

Other CETCO products used for waterproofing deep foundations include Ultraseal, which is also an APC system, but does not have welded seams; and Voltex, a well-known bentonite-based product. 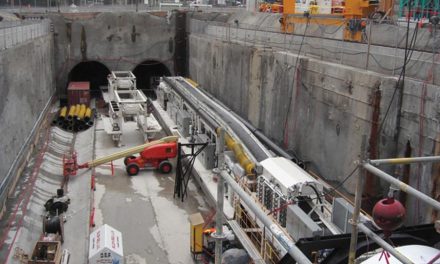 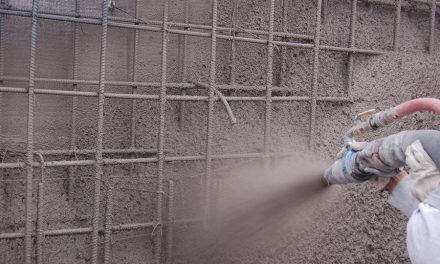 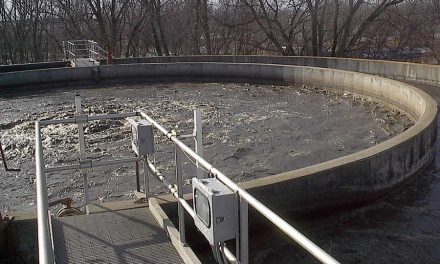