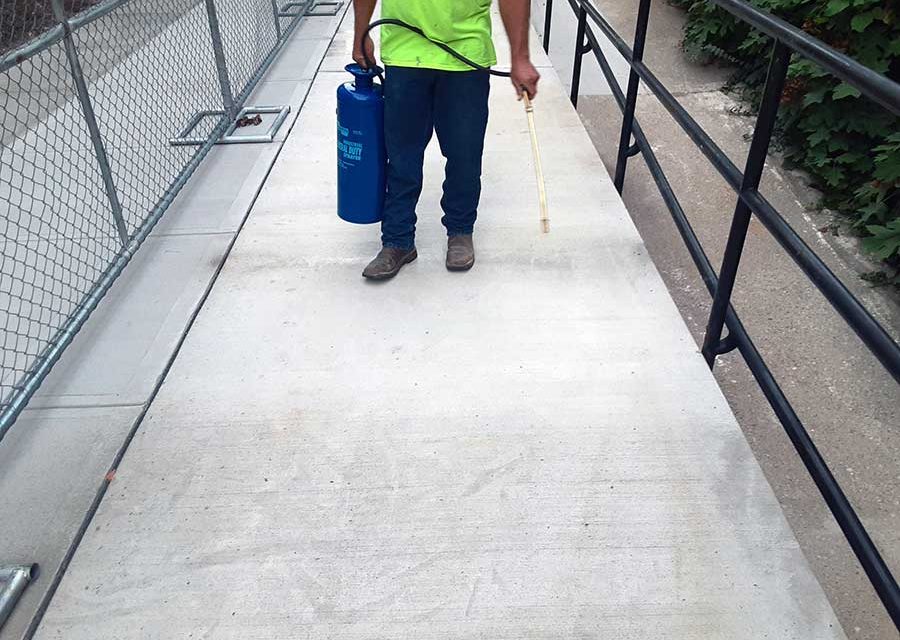 How do they work and what can they do?

Spray membranes and sheet goods can do a great job of protecting concrete. With the addition of a water-repellent sealer, concrete can be very well protected. But these external systems can also be worn away or damaged. Adding something to the concrete that protects it from within has a lot of advantages, particularly on something like a bridge or parking structure that is going to be consistently exposed and damaged over time. 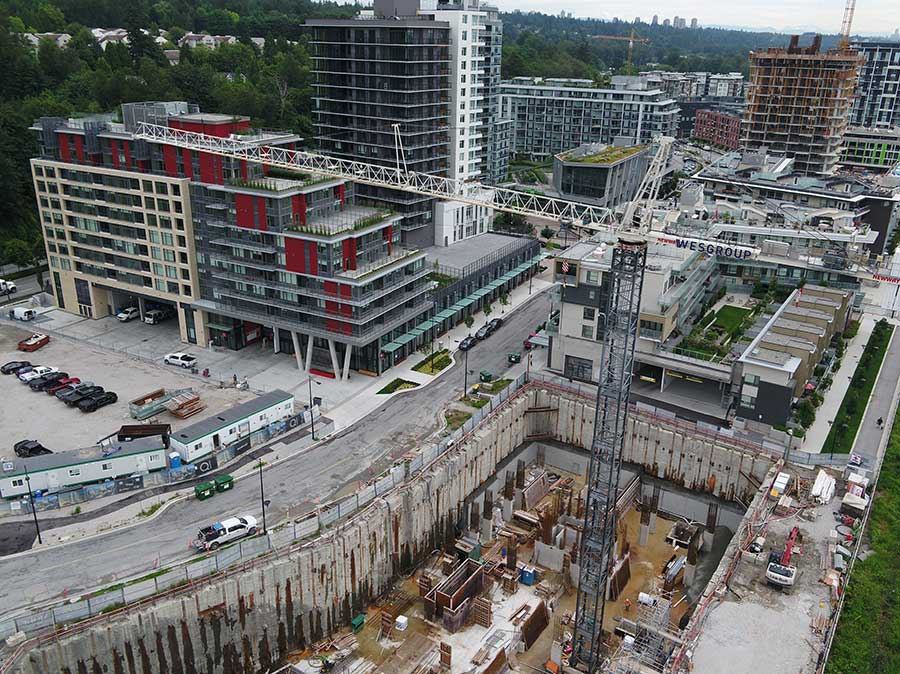 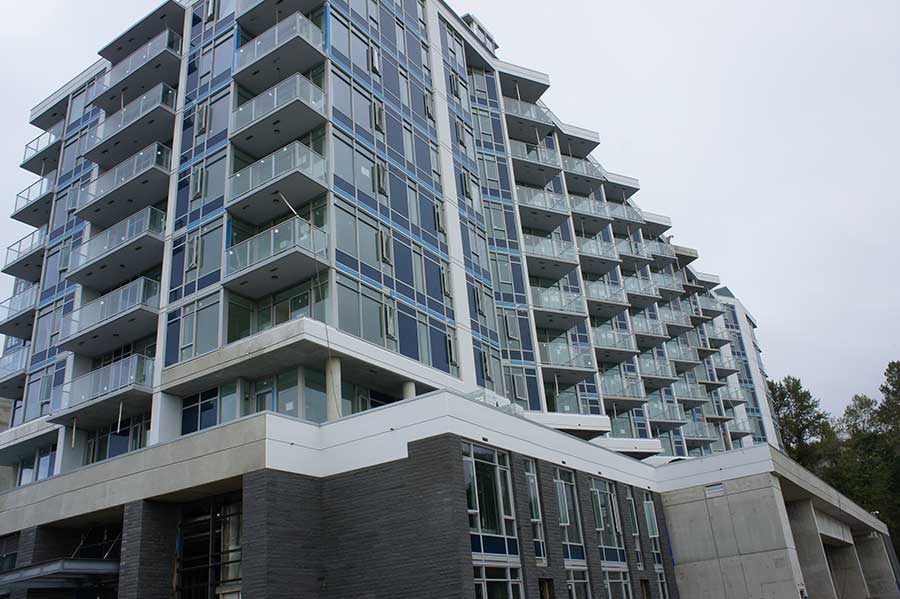 Kryton’s KIM products are often used in many of the projects in Vancouver, Canada’s River District due to a high water table.

Chemistry of Crystalline Admixtures
With an admixture, the crystalline powder is added to the concrete as it is being mixed, prior to the pour for new construction. While some CAs react with the natural by-products of cement hydration including calcium hydroxide, mineral salts, and mineral oxides, Kryton’s version of CA reacts with moisture and the unhydrated cement particles present in hardened concrete. Using water as a catalyst, the reaction forms a network of crystals that fill any voids in the concrete to prevent moisture and chemicals from entering. The crystalline network becomes a part of the concrete itself, rather than something applied to the concrete. Once the concrete hardens, the active ingredients in these admixtures remain inside the concrete and will reactivate in the presence of water if it does penetrate the concrete.

In the case of new water entering into the concrete, a new reaction occurs to produce a new water-impermeable structure in the concrete, to seal the pores and micro-cracks that allowed the water to enter in the first place.

The CAs are typically added to the batch at the concrete plant, explains Mario Baggio, the CEO of Alchemco in the United States. Adding the CAs does slightly affect the concrete’s set time. “It increases set time a little bit,” says Baggio. “But it doesn’t change the slump or any other property of the concrete. It’s only going to increase the strength and, and other capabilities of the concrete, but is not going to change the concrete.” Alchemco manufactures TechCrete Concrete Admix and DuraTite Crystalline Admix.

Kryton International Inc. invented the first crystalline waterproofing admixture back in the 1980s, and calls their technology Krystol Internal Membrane (KIM). Their formulation is chemically different than others, but it does basically the same thing — KIM chemically reacts with water and unhydrated cement particles to form insoluble needle-shaped crystals that fill capillary pores and micro-cracks in the concrete. Any further added moisture will again initiate crystallization, which provides ongoing waterproofing protection and crack sealing. Kryton CEO Kari Yuers was instrumental in helping to develop a new ACI category several years ago with the American Concrete Institute to provide guidance to the industry on this technology. Yuers is the current chair of the ACI 212 Chemical Admixtures Committee and Chair of the ACI’s International Advisory Committee.

Using Crystalline Admixtures
Baggio says the amount of set time increase depends on the specific mix design of the concrete, but the increase will be a matter of hours only. The amount of product that is needed is not the same from brand to brand because not all crystalline admixture recipes are the same. One important difference is the concentration. Baggio suggests looking at the amount of fillers in the product. At Alchemco, customers know they only need 22 ounces of mixture per cubic yard. Other manufacturers with more fillers may require the customer to buy more, which of course impacts the bottom line. 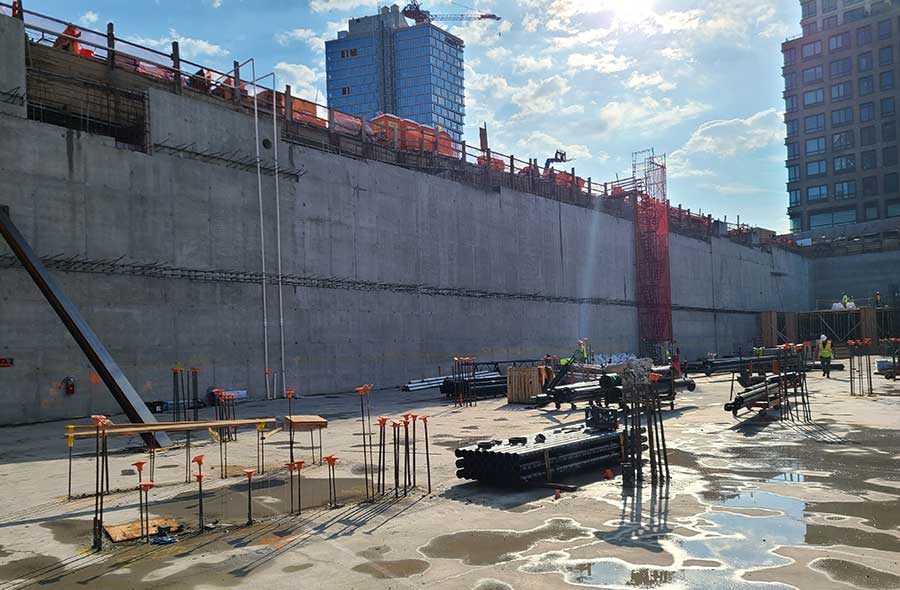 “Ours requires just one water-soluble bag per cubic yard which makes it easy to calculate how much you need,” says Baggio. “If your project is 1,000 cubic yards of concrete, you’ll need 1,000 bags of our waterproofing. We try to make every one of our products as concentrated as possible to reduce the additional cost of shipping and transporting. But in the end, the client should be concerned about the cost per cubic yard, not the cost of the mixture per pound.”

Baggio says the biggest misunderstanding of CAs are that they don’t work in every situation. CAs are a great option for below-grade construction. But in projects with thermal stress, like a parking structure or rooftop, you do need a flexible waterproofing solution. Baggio explains that crystalline admixtures are a rigid solution. “In this scenario, the crystalline admixture brings a lot of long-term value and protection but they should use a flexible option also,” he says. 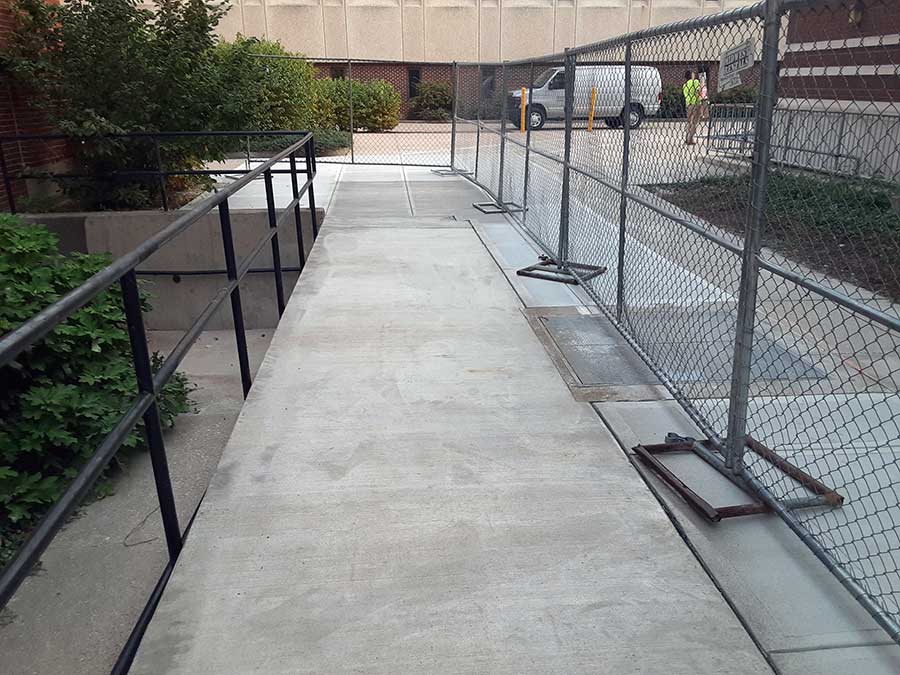 Last summer, Alchemco’s products were used on an important job for Purdue University replacing a maintenance tunnel top that also doubled as a sidewalk, plus extensive repairs on the side walls of the tunnel. TechCrete Concrete Admix was added to the concrete prior to pouring. Once all concrete had been poured and cured for 28 days, TechCrete 2500 Waterproofing Agent was applied to all the exposed concrete surfaces and then allowed to dry. As soon as the surfaces were dry to the touch, the surfaces were watered and cleaned of excess material. After the surface was again allowed to dry, ACR Crack & Void and ACR Accelerating Agent was applied to the concrete surfaces. Once dry, the final watering and cleaning was performed.

History of Crystalline Admixtures
The technology began decades ago with a crystalline brush-on material, which was used to repair or treat concrete once in place, explains Yuers. Yuers’ father, Ron, invested in improving that technology so it would work under higher hydrostatic pressure and would penetrate inches into the concrete. “So on the basis of the existing technologies, he worked with a chemist to develop something that would grow better crystals that would go deeper right through the concrete,” Yuers says.

At first, Ron told customers they still had to brush it on so as not to affect the concrete setting time. But the company had some customers who added it to the concrete mix anyway — Kari says contractors are all willing to try something that will make their lives easier! “It not only worked great, but it actually reduced cracking and it made the concrete finish better.” So Ron started testing it as an additive and they found that it worked quite well.

“If you can eliminate a lot of the cracks before they even happen, you’re that much farther ahead with waterproofing because most of the water that deteriorates concrete transmits through cracks and joints,” she says.

One project is the River District, a 130 acre planned community on the banks of the Fraser River in Vancouver. Kryton’s waterproofing system can be found in all phases of this project. The development is located between a river and a steep hill with most of the buildings designed with two-story underground parkades. The waterproofing plan had to accommodate a high water table and excess water runoff coming down from the hill.  The design team specified the use of KIM in the concrete mix for all the below grade areas of the development. To complete their waterproofing system, they also applied Krytonite Swelling Waterstop, Krystol Waterstop Treatment, and Krystol Waterstop Grout on the below grade construction joints.

New England Dry Concrete in New York is the largest distributor of Kryton’s crystalline products in the US. Dry Concrete performed work on a project called 595 Dean Street, a two-building mixed-use project in Brooklyn. Dry Concrete owner Gregory Maugeri says this project used 8,800 cubic yards of concrete enriched with KIM on the slab and walls with no other waterproofing. “This is another one of our large projects that have chosen the Kryton system in an extremely challenging environment,” says Maugeri. “Once designers fully understand the benefits of the admix and waterstop system, it becomes a go-to design for them.” 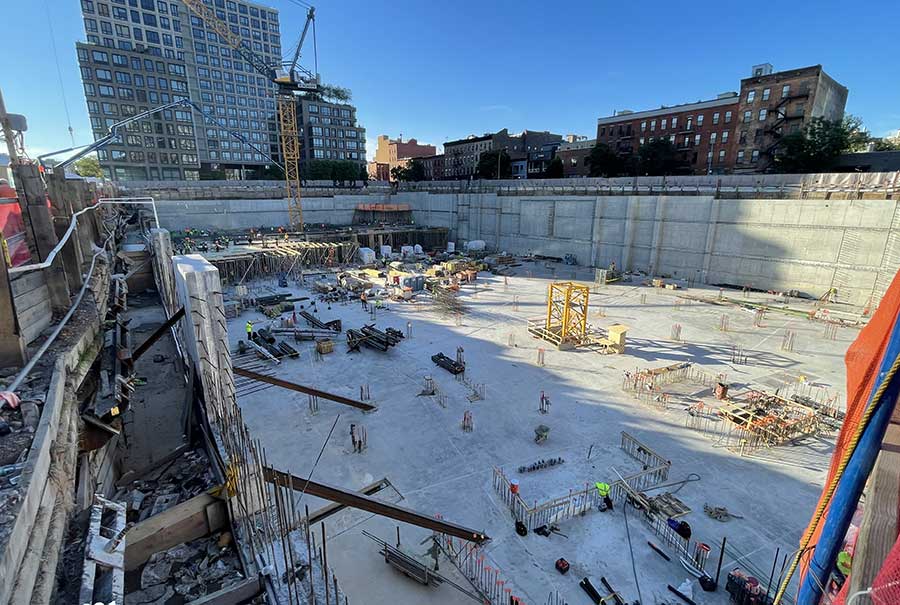 Typically, KIM is used in the footings, pile caps, and the mat slab, which is a concrete slab designed with reinforcement to resist the uplift forces created by hydrostatic pressure. The Waterstop system is then used to join the wall to the slab as well as to other sequential walls. It is also applied to the area that will receive the next pour of concrete, e.g. wall on top of slab or wall-to-wall. The Krytonite Swelling Waterstop strip is glued down with a special adhesive at a convenient location in the joint.  Prior to the pour a keyway fur is created during forming and in-filled after the forms are removed with the Krystol Waterstop Grout. “This is a big foundation and there was no physical membrane used, saving time and expense with what has become an incredibly reliable system,” Maugeri adds.

Waterproofing Agricultural Buildings
By Vanessa Salvia
Farming is a low-profit, high-cost endeavor, so in many cases the farmers are thinking about where they can save money in the short term. But eventually, when agricultural buildings are left to the elements with no protection, they fail.

Protecting the Niagara Falls Pedestrian Deck
The Niagara Falls pedestrian deck and bridge is surely one of the wettest spots to be. The decking is removed each year and resealed with Thompson’s WaterSeal products to make them last.

Hycrete Waterproofs Luxury Residential Tower
The Atlas is the tallest residential tower in downtown Oakland, California. The tower is located next to a busy street, and because of this, membranes could not be used. Hycrete’s System W solved the problem.

Protecting Parking Deck Systems
By Amir Hassan, MSc, PE, PEng
Parking systems are open-to-the-elements structures that need precautions because they are costly to build, repair, and replace. To have a durable deck, water management is vital.

Be the first to review “Spring 2022 Back Issue” Cancel reply 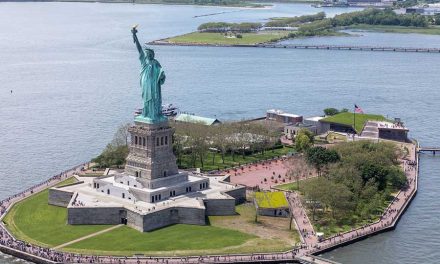 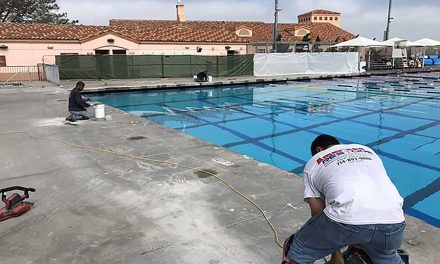 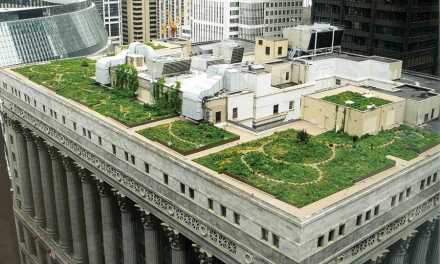 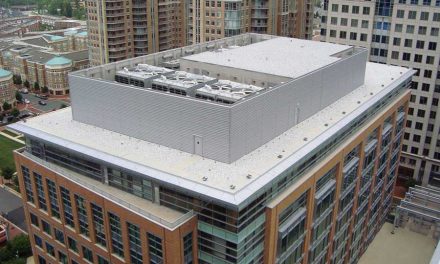