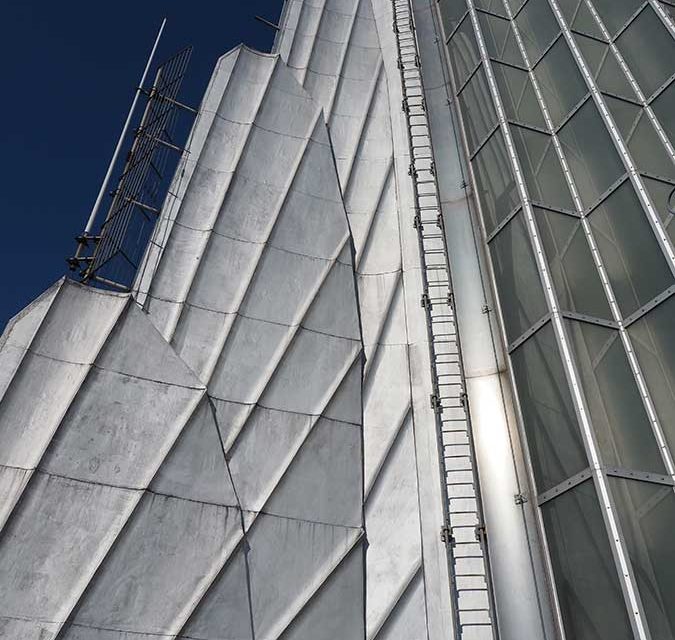 For the first time in the Empire State Building’s history, the entirety of each fin is uniformly coated with a silver waterproof paint.

One of the most iconic buildings in the nation, if not the world, received a much-needed facelift. A recent renovation project restored the Art Deco luster of the Empire State Building, the world-renowned 102-story Art Deco skyscraper in Midtown Manhattan in New York City.

Completed in 1931, the Empire State Building’s original design significantly influenced architectural styles. The distinctive spire with its Art Deco sculptural aluminum wings and multi-story illuminated lantern made it the world’s tallest structure from 1931 to 1970, and again from 2001 (when the World Trade Center fell) until 2012. It still virtually defines the New York City skyline and is an indelible icon. 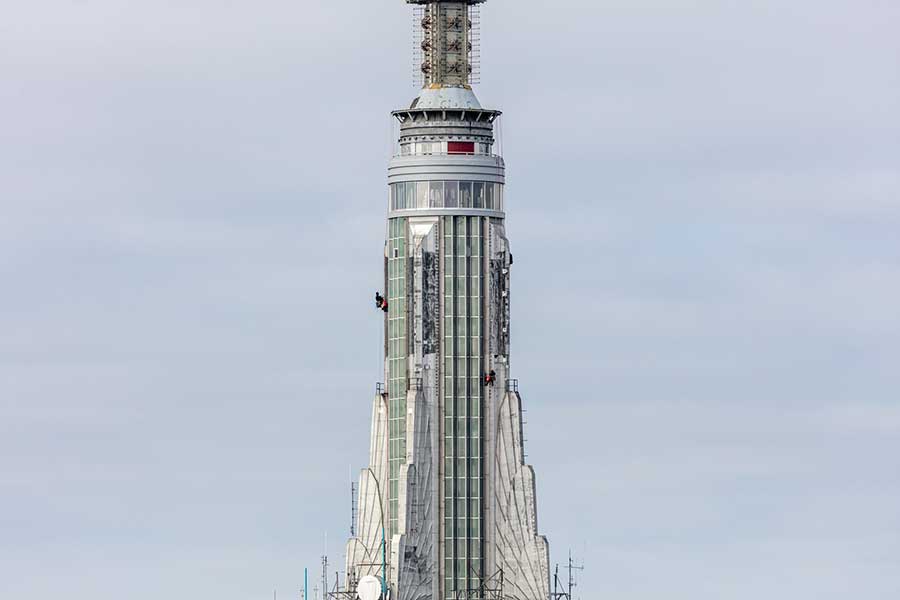 Workers scaled the top stories of the 1,270-foot-tall Empire State Building to replace panes of glass, replace and coat fins, and replace waterproofing.

“The renovation was brought about as part of a larger project to remove obsolete antennas and dunnage between the 88th floor and the 103rd floor, ensure weather-tight integrity, and restore the mooring mast to its original architectural grandeur,” says C. Peter Sjolund, senior vice president of design and construction at Empire State Realty Trust.

One of the major changes to the Empire State Building over the years was the addition of television and radio broadcasting equipment to the Mooring Mast — the element of the high rise which includes the spire — located between floors 88 and 103. Over the years, the equipment became an unruly jumble. The communications equipment was relocated to the newly extended upper spire of the structure, obsolete antennas were removed to streamline the exterior, and the Mooring Mast and dome were cleaned and waterproofed. More than 44,000 pounds of equipment were removed from the building. The restoration of the fins was completed in October 2020.

Dome waterproofing involved replacing the existing waterproofing membrane from the underside of the celebrity balcony on the 103rd floor to the base of the antenna spire.

Workers were rigged with ropes and did most of the restoration and waterproofing work of the iconic fins of the Empire State Building during the midnight to 7 a.m. shift.

The Mooring Mast fin waterproofing involved cleaning and protecting 223 aluminum plates and three custom aluminum casts. 2,603 bolt repairs were installed to permanently waterproof miscellaneous perforations throughout the fins. After all penetrations were permanently sealed, all four fins were scrubbed and power washed down to the original aluminum facade. For the first time in the building’s history, the entirety of each fin is being uniformly coated with a silver waterproof paint, blending in the extensive repairs done to the building’s exterior.

The paint on the fins is an alkyd-based aluminum flake paint — Tnemec Top Coat Series 43-36. PMMA liquid-applied roofing material by Siplast was applied to the dome.

The historically compatible flake paint will prevent further oxidation and also reestablishes the original appearance of the cast aluminum.

“This recent work is really the final phase of an overall restoration of the entire mooring mast, which had not been touched in over five decades,” explains Sjolund. “The prior phase included the replacement of over 480 glass panels.” 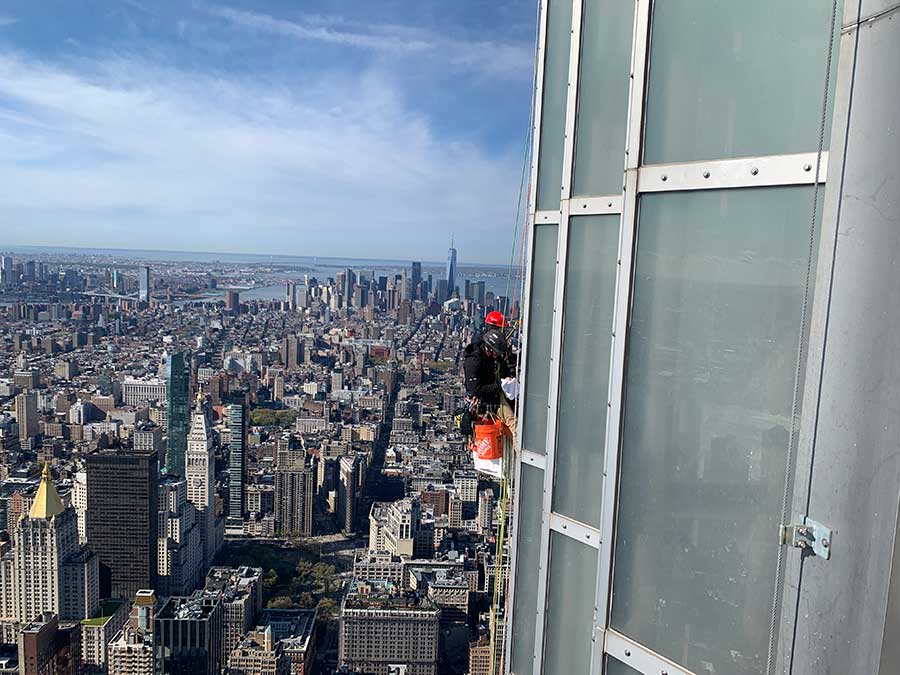 Due to height and weather, workers had to be rigged with industrial rope access (IRA) versus typical fixed or movable scaffold systems.

The height of the building was just one challenge. At around 1,270 feet at the top of the dome, wind and weather required special access and safety requirements for workers.

“The weather at that height is often very different than at ground level,” says Sjolund. “Industrial rope access (IRA) greatly simplified this work versus typical fixed or movable scaffold systems. Also, the Empire State Building Observatory business took precedence with regards to working hours, therefore much of this work occurred during the third (midnight to 7 a.m.) shift.”

Selecting Dehumidifiers
By Vanessa Salvia
Many homeowners think they can buy a dehumidifier off the shelf of a big box store and plug it in down in their basement. But there are many problems with this approach, including inadequate drainage, inadequate air movement, lack of air filtration, and sometimes catastrophic failure.

Options for Structural Repair: Crack Repair, Carbon Fiber, Piering, Grouting
By Vanessa Salvia
Here’s a primer on the four major aspects of repair when there is a structural or non-structural issue with a basement. It takes some skill to discern which approach is best, especially with regard to cracking, and the experts we talked to broke it down for us.

Waterproofing Metal Buildings
By Vanessa Salvia
Metal structures have a lot of advantages, but when it comes to waterproofing they need special consideration. Many waterproofing membranes aren’t designed to be under metal. Since a metal structure bakes all day in hot sun, the materials need to be formulated for high temperatures.

Mold Growth in New Construction
By Michael Rubino
A mold expert explains how owners of new homes are regularly encountering major mold issues. Just because a home has no water damage doesn’t mean it is immune to mold.

Be the first to review “Summer 2021 Back Issue” Cancel reply 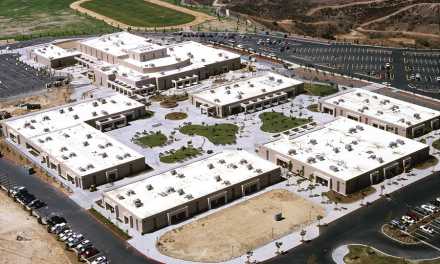 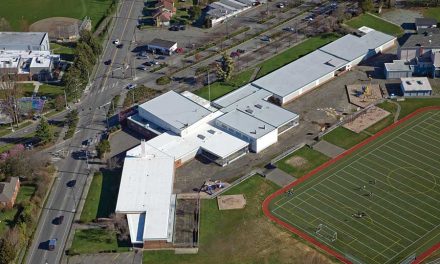