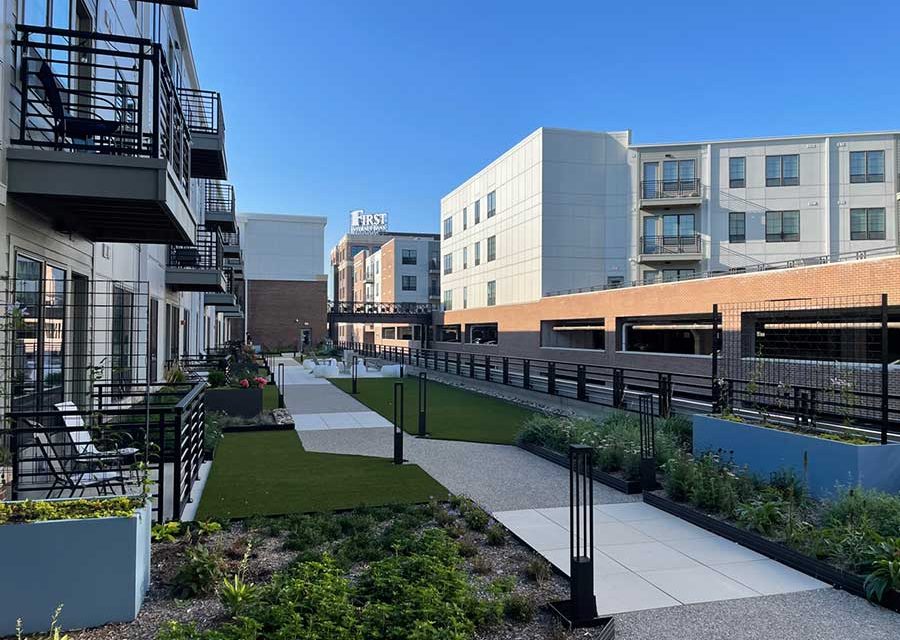 It is clear that a roof can have far more value than just being used as a place for air conditioning units. When a homeowner includes plans for a vegetated roof, the vegetated roof components can extend the roof life and can provide a patio for recreation or an improved view. On commercial structures such as offices, apartments, or hotel buildings, a green roof can provide a host of benefits: energy savings on heating and cooling, improved stormwater management, reduced heat island effect, improved air quality, reduced greenhouse gas emissions, and usable amenity space with a pleasing view. 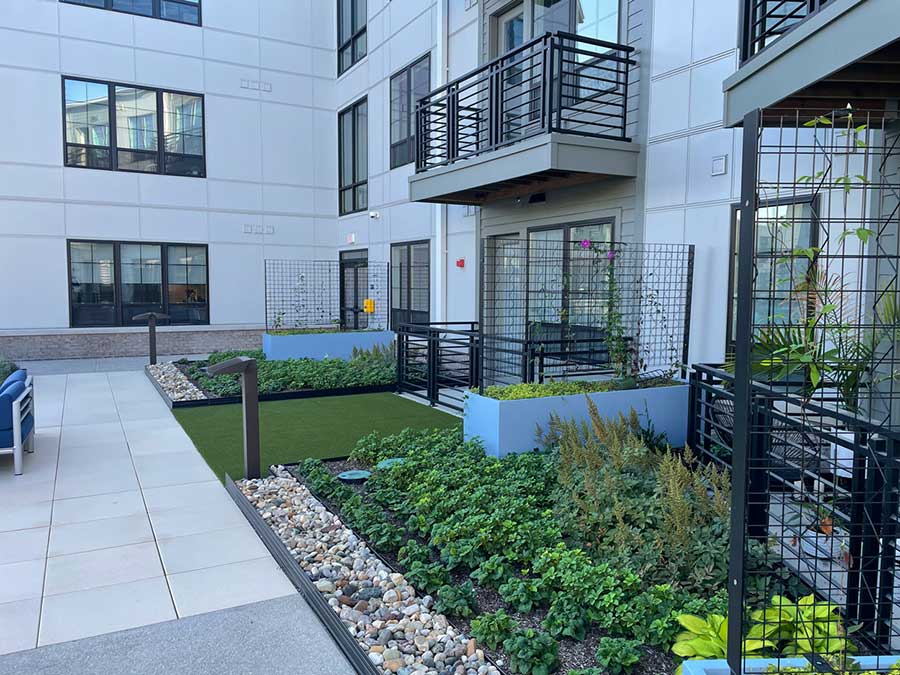 All photos show a mixed-use rooftop area, part of the Nickel Plate Apartments in Indiana.

Blue, Green, and Blue Green Roofs
There are several types of green roofs. Factors that can influence what type is used vary depending on the owner’s intent for the use of the roof, the roof’s structural capacity, weight, and the expected maintenance of the plants.

Green roofs can be gauged on being intensive, meaning a garden on a roof with many different types of plants, and extensive, meaning low-maintenance and largely self-sustaining. The extensive roof is the most affordable, most lightweight option that is ideal for flat roofs. The plants that are used in this green roof are typically sedums, but any plant that is hardy and can withstand harsh growing conditions is a suitable choice.

In all of these cases, the water outflow restriction is created at a flow control roof drain. This simple drain is designed to only allow a certain amount of outflow at any one time.

A blue green roof includes aspects of both types of roofs to maximize stormwater management within a green roof system that includes plants. 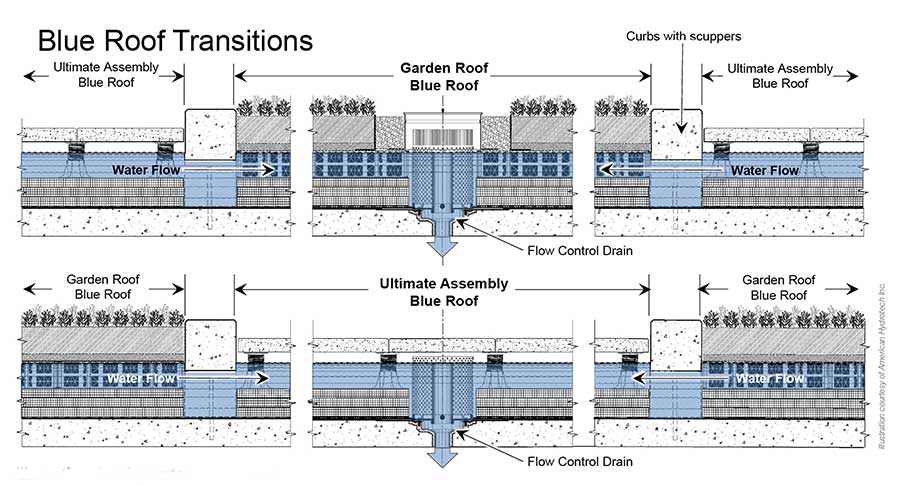 Growing media for a vegetated roof is not soil but a blend of engineered lightweight aggregates, sands, and composts. Hydrotech blends their own proprietary growing media in many sites across the United States and Canada with the following factors in mind: creating a lightweight blend with high water retention and high air capacity. The water holding capacity of the media is the “workhorse” for stormwater management, Hayden says, and the other green roof components such as filter fabrics, drainage elements, and edgings all play a part in the stormwater management capabilities.

“Owners are discovering that roof surfaces are far more valuable than just a place to put air conditioning units,” says Hayden. “They can use the roof to create beautifully landscaped and paved amenity spaces while simultaneously satisfying the project’s stormwater needs and potentially saving money in the process.” 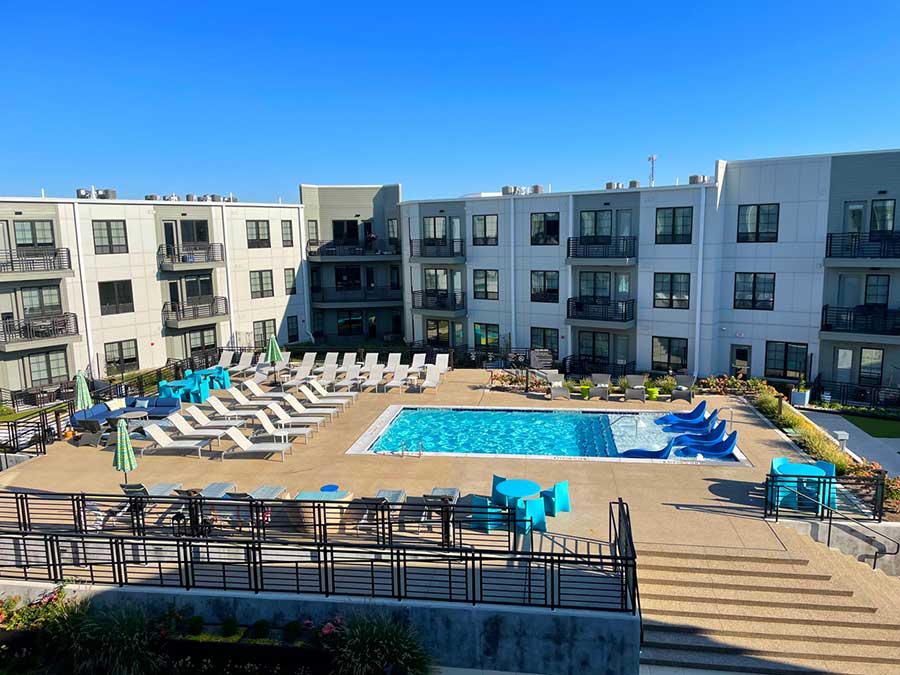 Rick Buist is principal consultant to Tremco’s North American vegetated roofing program. He is also an award-winning designer and horticulturist with special knowledge of green roofing. Buist explains that runoff that can’t be absorbed by the green roof system itself is accommodated by a drainage plane underneath the growing medium that the plants are in. “It is very necessary to have an air space, usually in the form of a drainage board or something along those lines, to allow for water to move along the surface of the roof under the green roof and make its way to the roof drains,” he says.

Buist also agrees that stormwater management is a driving force in the industry today. “It is pushing municipalities to create new bylaws around green roofs,” he says. “We’re now at the point where we have enough knowledge that civil engineers can tell us that this green roof will be able to absorb X amount of rainfall in your region. And it’ll be able to recharge at X gallons per square foot per day.”

Stormwater management has become something that is no longer an amenity to add to a building’s design, but something integral to the building plan overall. Controlling runoff helps prevent soil erosion, prevents spread of pollutants, and protects habitat in rivers, lakes, and streams. With the knowledge we now have, civil engineers can design buildings where the roofing system handles runoff rather than building infrastructure at ground level.

“It’s all about balance,” Hayden says. “Keeping the green roof assembly light while creating a high-performance green roof is the ultimate goal. We strive for the green roof to stay light but also to address the stormwater needs of the project. Owners are recognizing that in many cases the stormwater benefits of green and blue roofs can offset — or be less expensive than — commonly utilized at-grade or below-grade stormwater techniques.” 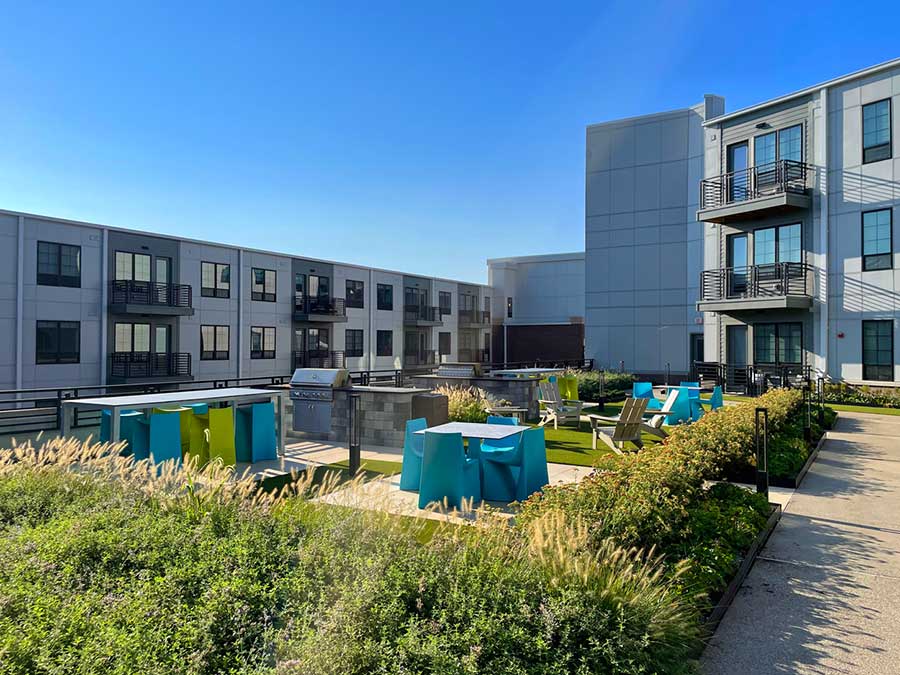 Buist explains that weight is measured at saturation, so every component of a green roof system has to be measured at its fully saturated condition and added up. “The structure of the building has to be able to hold that sum of weight,” Buist says. “In fact, when I do presentations to architects, the very first thing I tell them is, you need to pay attention to structural load before you even choose your green roof system.”

That means, either designing the structure into the building, or ensuring that the roof is within the parameters of what the building can hold. “It’s really important to get that information right at the beginning of the design, then you can design with confidence,” Buist says.

Other Performance Attributes
In addition, green roofs are an important component of keeping a building cool and helping cool the environment by reducing the heat island effect. The cooling comes about due to the phenomenon of evapotranspiration in which plants transpire, meaning they release moisture into the air. “They keep the roof membrane cool, which extends the life of the membrane,” says Buist. “The biggest reason roof membranes wear out is due to UV exposure and heat fluctuation. So if you cover that with a cooling thing, like a green roof, then you’re going to increase the longevity of your roof membrane. And then secondly, you’re going to have that cooler air feed into your HVAC systems, meaning you’re going to save energy in that regard as well.”

Tremco has an energy consultant who can provide example energy balance equations that show how much money can be saved on energy costs over time by putting a green roof in place. 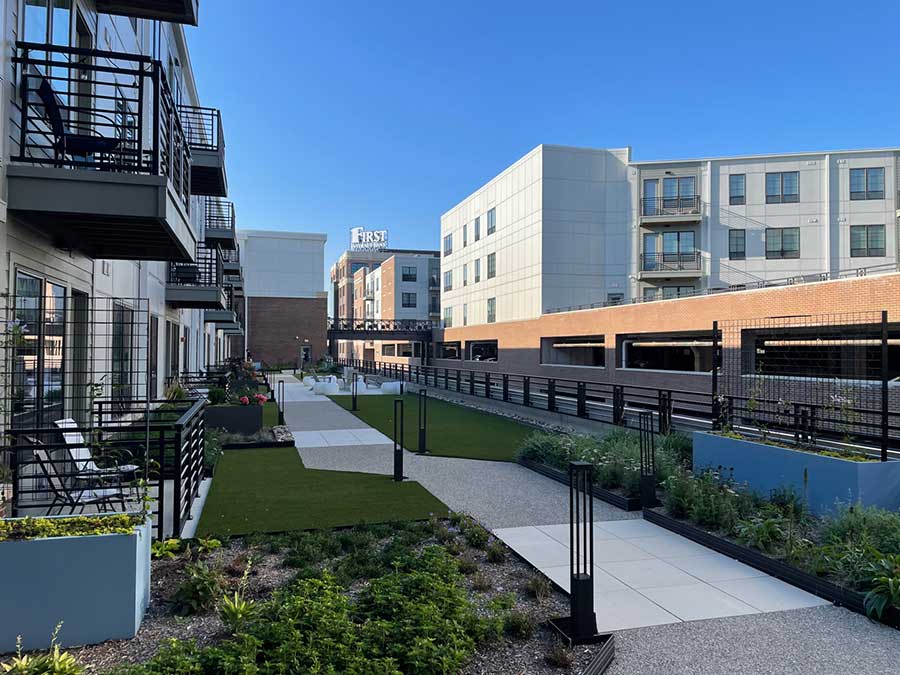 Aesthetic Benefits
“In urban cores, green roofs allow people to look out the window and see greenery instead of a roof filled with air conditioning units,” says Buist. “Even if people don’t understand the performance benefits of a green roof, they totally understand the aesthetic benefit.”

Buist describes the success of a project in which a client turned the rooftop of his condominium into outdoor spaces that he sold at a $25,000 premium to unit owners on a first come first serve basis, so that they could have some green space. “We divided the whole roof up into small private yards, and sold them as an upsell on the unit,” says Buist. “They were snapped up. They were the first units to go.”

The Bottom Line
Green roofs can help reduce stormwater, which protects the environment in many ways. They reduce energy bills, provide an increase in biodiversity in an area, extend the life of roofing membranes, and more. While all of these advantages are important, a green roof looks nice as well. The investment into a green roof may be more up front, but it is clear that the reward and payoff is worth the effort.

Vapor Barriers and Underslab Solutions
By Vanessa Salvia
Vapor barriers are a moisture control strategy that is crucial for just about any home in any environment. These systems go by various names but they all reduce the rate at which water vapor can move through a material.

Managing Weight & Water In a Green Roof
By Vanessa Salvia
It is clear that a roof can have more value than just being used as a place to spread out air conditioning units. There are a few different types of green roofs. Factors that can vary include the roof’s thickness, weight, and the expected maintenance of the plants.

Be the first to review “Winter 2023 Back Issue” Cancel reply 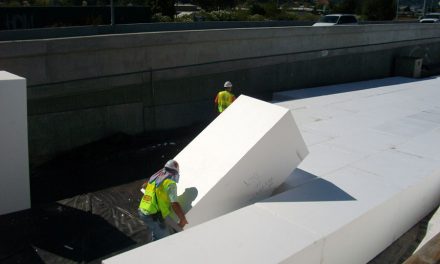 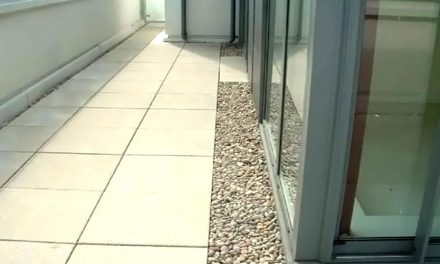 A New Look at Ballasted Roofs 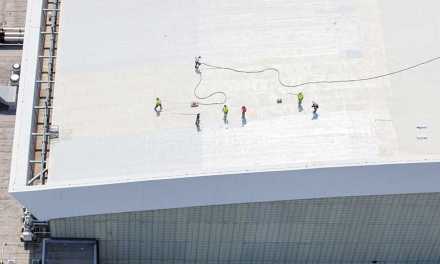