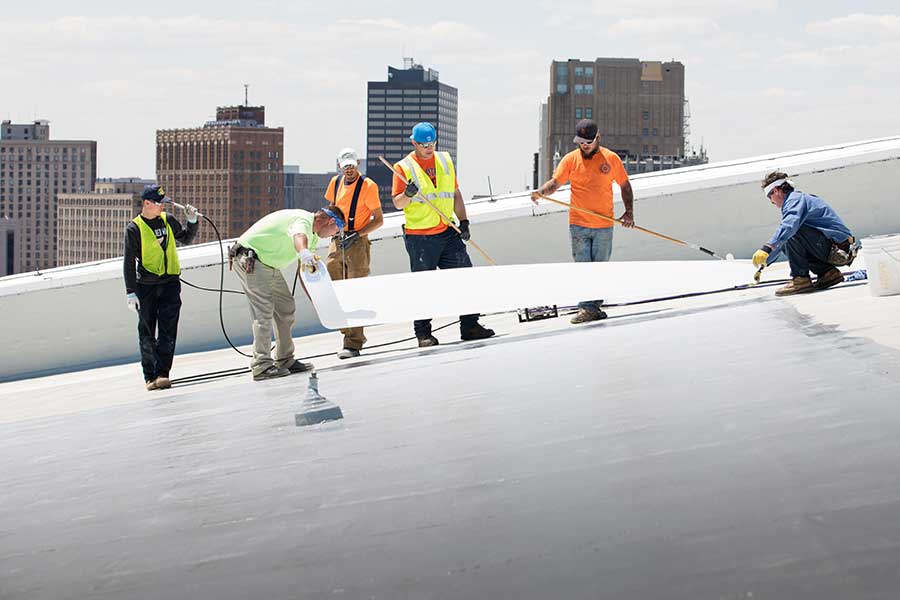 A new report predicts that the waterproofing membrane market will see solid growth for the next decade, averaging 8% annually.

The report was researched and published by Fact.MR, a consulting firm with offices in Ireland and the UAE.

Commercial roofing is the largest segment, accounting for just more than 30% of the total waterproofing membrane market. Walls and building structures collectively account for more than half of total market share, including renovation and upgrades of existing waterproofing and drainage systems.

The fastest-growing market segment globally is waterproofing membranes in tunnels and landfill pit liners. Liquid-applied membranes are expected to more than double in the 10-year period.

North America will maintain its dominant position as the largest player in the global waterproofing membranes market, with nearly one quarter of total market share.

“The results affirm that roofers and building owners can trust our products to perform in high wind conditions,” said Ariel Lender, director of product management and technical services. “We continue to offer high performing solutions that can be installed on all types of roof decks.”

The new code approvals were awarded after rigorous third-party testing in accordance with FM4470/TAS114(J)/UL1897. The multi-ply roof systems consisted of torch adhered modified bitumen membranes with mechanically fastened cover boards over steel decks. Third-party testing extends beyond Florida and is applicable across the United States.

In February, ASTM International announced that it is developing a proposed standard that will help evaluate the thermal and moisture properties of modified roof assemblies.The standard (WK70955) is being developed by the building performance committee (E06).

Specifically, the standard could help evaluate steep-sloped roof assem-blies after adding insulation, making alterations in ventilation, and/or changing the interior environment beneath the assembly, such as conditioning the space below roof decks.

“Energy conservation is a growing concern for existing buildings, whether constructed a few years ago or a historically significant structure,” says ASTM International member Rex Cyphers, a consulting engineer with WDP & Associates. “Many of these buildings were originally constructed with uninsulated and unconditioned attics and roofs, but changing the roof assembly without understanding how the existing assembly operates can have major consequences to the structure,”

Cyphers notes that, without a proper evaluation, changes could have serious negative impacts on the integrity of the existing roof assembly or the supporting structure as well as creating condensation and moisture-related issues.

The proposed standard would give designers and builders guidance on how to properly evaluate proposed modifications in order to avoid negative repercussions of those modifications, he says.

Owners and building professionals are encouraged to help develop the new standard by joining ASTM at www.astm.org/JOIN.

Three of NCFI’s geotechnical polyurethane materials, TerraThane 24-003, 24-010, and 24-042, now carry the National Sanitation Foundation (NSF) and American National Standards Institute (ANSI) Standard 61 certification for safe use in and around drinking water and other water sources.

“NSF/ANSI 61 is the most widely recognized industry standard for protecting public health,” says Patrick Burchett, market manager for NCFI’s geotechnical division. “It is required for many projects involving materials that come into contact with potable water Three of our most popular products now carry this certification, meaning they’ve been tested to meet safety standards for projects in and around water sources.”

Burchett says, “The infrastructure rehabilitation market for seawalls, stormwater conveyance systems, municipal water treatment, and other applications is immense. We’re giving contractors who work on these projects the products they need to get the job, and get the job done right.”

Last year, Soprema and 3M launched a joint initiative to use a brand-new highly reflective white granule in an SBS-modified bitumen roof membrane.

The result is now available, and being sold as part of Soprema’s Sopralene and Elastophene product lines. These new-generation SG cap sheets are improved with 3M’s highly reflective granules, bringing improved durability and an even brighter white appearance to the market. (They have a tested initial solar reflectance rating of 0.65, an aged reflectance of 0.62, a thermal emittance of 0.91, an initial SRI of 80, and an aged SRI of 75.)

“We are pleased to be the first to provide this technology: a bright, reflective system without sacrificing multilayer bituminous waterproofing performance,” said Matt Davis, product manager for roof membranes.

The videos combine live-action footage and animation ensure that novice roofers and veteran contractors alike will learn something.

The video libraries can be accessed on the Mule-Hide Products YouTube channel or on www.mulehide.com.