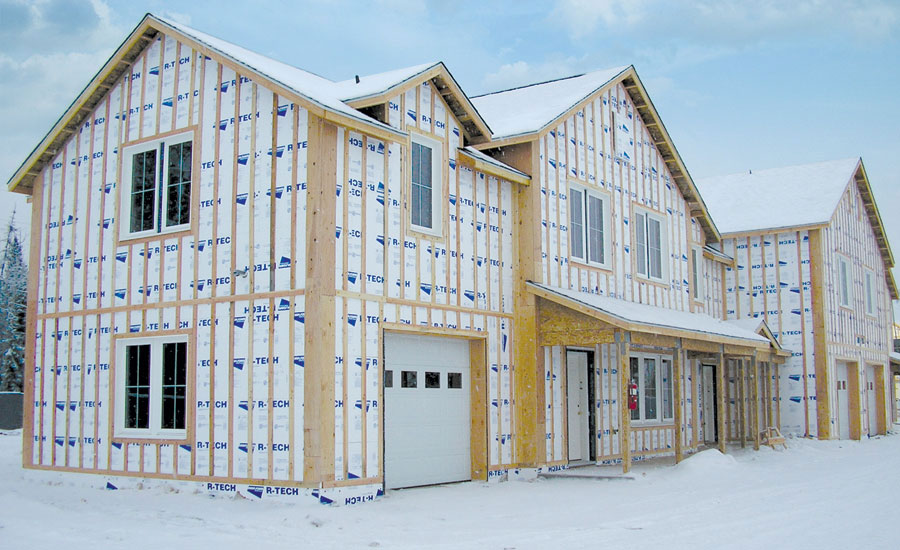 It’s clear that building codes in both the U.S. and Canada are trending towards better insulation, and more of it. Additionally, enthusiasm behind the “green building” movement has encouraged buildings that far exceed code requirements.   In many cases, this extra insulation is affecting how waterproofing is applied.

Energy codes were first developed in the 1960s, and since then, they have moved in a single direction: higher efficiency and more insulation.  The 2012 International Building Code (for the U.S.) and 2010 National Building Code of Canada (which went into effect in 2012) continue to raise the bar.

At a practical level, this is almost always rigid sheet foam, and this creates potential difficulties because it isn’t vapor permeable.

In the past, homes and commercial buildings were drafty enough that the movement of moisture-laden air wasn’t a cause of concern.  Water vapor would move through the wall assembly without creating any problems.  Wet construction materials would dry out.  However, with today’s tighter buildings, water, air, and water vapor can build up inside the wall cavity.  This moisture can allow mold and mildew, which will affect indoor air quality, occupant health, and the safety of the building.

With the proper understanding of how water, air and moisture barriers work, along with continuous insulation, the waterproofer and specifier can rest assured the wall assembly will function as intended.

Below-grade continuous insulation is now standard practice. In most areas of the U.S., building codes call for an R-10 continuous insulation on the exterior of basement foundation walls. Usually, builders use two-inch-thick EPS or XPS rigid sheet foam.  XPS has a higher rated R-value per inch, although some studies indicate that EPS holds its R-value better over time.

Air/vapor barriers can be applied under the insulation, or applied on the exterior face as seen here.

Both materials will dissolve on contact with solvents.  Many waterproofing contractors use a spray-applied waterproofing product to seal the foundation walls, then apply the foam board to the wall immediately, using the still-tacky product to hold the boards in place until the wall is back-filled.  If this is the preferred method, extreme care must be taken to ensure the waterproofing is compatible with the foam (e.g. no solvent-based products) to prevent damage.

As an additional note, rigid foam insulation frequently includes built-in grooves for drainage, eliminating the need for a separate drain sheet and protection board.

Churches, hotels, schools, hospitals, theaters, and  office buildings are all transitioning to continuous insulation above grade as well, and for good reason.  This shift is affecting the waterproofing industry because, in addition to blocking thermal bridging, continuous insulation frequently eliminates the need for a vapor barrier.

To understand how continuous insulation affects this, let’s look at a typical wall in a cold climate: With cavity insulation, in wintertime, warm moisture-laden air from inside the building is driven outward into the wall assembly.  When it reaches a surface that’s below the dew point—typically the inside of the exterior sheathing—the vapor condenses into liquid water droplets,  creating the potential for mold.

If continuous insulation is applied to the outside of the wall, it effectively moves the dew point from inside the cavity to the exterior cladding, preventing condensation within the wall system and greatly reducing the risk of mold and mildew.

Prior to the rise of continuous insulation, the solution was to install an air/vapor barrier—usually polyethylene sheet—on the inside face of the wall cavity, which would allow the walls to “dry to the outside.”

For decades, codes have required that the exterior skin of the structure to be at least five times more vapor-permeable as the interior, for this very reason.  However, rigid sheet foam is impermeable to water vapor, and when a structure is sheathed in several inches of continuous insulation, exterior walls no longer meet this requirement.

To prevent moisture and mold, builders must either add enough foam to the exterior that the sheathing never falls below the dew point, or build in such a way that the walls can “dry to the inside.”  This means no interior polyethylene films, no vinyl wallpaper, and no closed-cell spray foam. (Open-cell spray foam is OK, as it is vapor-permeable.)

In recognition of these facts, the 2007 Supplement to the International Residential Code (IRC) and newer versions of the code specify the minimum amount of exterior foam needed to ensure moisture won’t accumulate in the wall, and also allows certain cold-climate walls to dry to the interior.

This change in how moisture moves within a wall has led to some confusion as to where the above-grade moisture barriers should be placed.

Adding to the confusion is that there are several types of barriers, and sometimes a single product will fill multiple roles.  Continuous insulation can be detailed to serve as a water resistive barrier, air barrier, and vapor barrier if the seams are properly detailed.

A logical point to begin is examining the function of each of these barriers.  Water control layers are best located directly behind the cladding to divert to the exterior any moisture that finds its way behind the exterior finish.  In residential construction, house wrap and building paper usually serve this purpose. In commercial construction, liquid applied coatings are more common.  Some projects use rigid insulation boards with taped and sealed joints.  Regardless of the material, the water control layer must be connected to window and door flashings and other penetrations. This water control layer deals only with liquid water, and may not control vapor or air movement. It is often referred to as the “drainage plane.”

If the walls are sheathed with rigid insulation, but not taped and sealed, there are several options for the water control layer, which will be a separate product.  It can be placed either behind or in front of the rigid insulation. A Dow manual notes that, “A third option of placing the water control layer in between two layers of insulation is also possible, but can lead to significant confusion and coordination problems during construction and is for the most part, not recommended.”  The manual goes on to note, “The choice of the location of the water control layer will affect many other enclosure connection details. The strategy should be clear and consistent throughout the entire project.”

Some spray-applied waterproofing products can be used to adhere the rigid foam insulation in place until the wall is back-filled.

Keep in mind that this water control layer is separate from any air and moisture barrier.

Building science has learned that controlling air movement is almost as important as insulation for energy efficiency. Up to 40% of a building’s heating and cooling is lost to draftiness.   Most materials that are impermeable enough to function as an air barrier lack the rigidity to handle the air pressure differentials generated by weather.  So designers typically couple a rigid material—such as plywood, OSB or foam board—with an impermeable layer such as polyethylene, house wrap, or a liquid-applied membrane to create a combined air/vapor barrier.

It can get complicated because, as already mentioned, the same strategies that keep moisture out of the wall will also trap water vapor in.  This is especially problematic if the construction materials start out wet (for instance, because of rain) or the use of wet materials during construction (such as concrete or paint) without allowing sufficient time for materials to dry.

In some cases, continuous insulation affects how waterproofing is applied.

It’s further complicated because water vapor moves from the warm side of building assemblies to the cold side, and that is climate dependent. So warm buildings in cold climates risk condensation on the exterior sheathing, while air-conditioned buildings in hot climates risk condensation forming on the interior of the wall space.  In four-season climates, vapor flows in both directions depending upon the season.

The most basic is the “flow-through” assembly, common in old construction, where any vapor inside the wall cavity can pass through to either side.  This method is becoming increasingly uncommon as jurisdictions adopt more modern building codes.

The second method is the “vapor control” approach of installing a distinctive vapor control layer as part of the wall assembly. The most common location for the vapor barrier is on the  “warm in winter” (interior) side of the thermal insulation.

The third approach, which is projected to become industry standard as continuous insulation gains ground, is to control the temperature of the surfaces where condensation is likely to occur by adding insulation. As already noted, in cold climates, this usually means adding rigid insulation to the exterior and discontinuing the use of an interior side vapor barrier. Within the design field, these are called “control of condensing surface temperature” assemblies.

Be the first to review “Winter 2017 Back Issue” Cancel reply 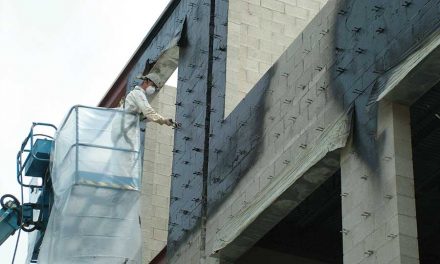