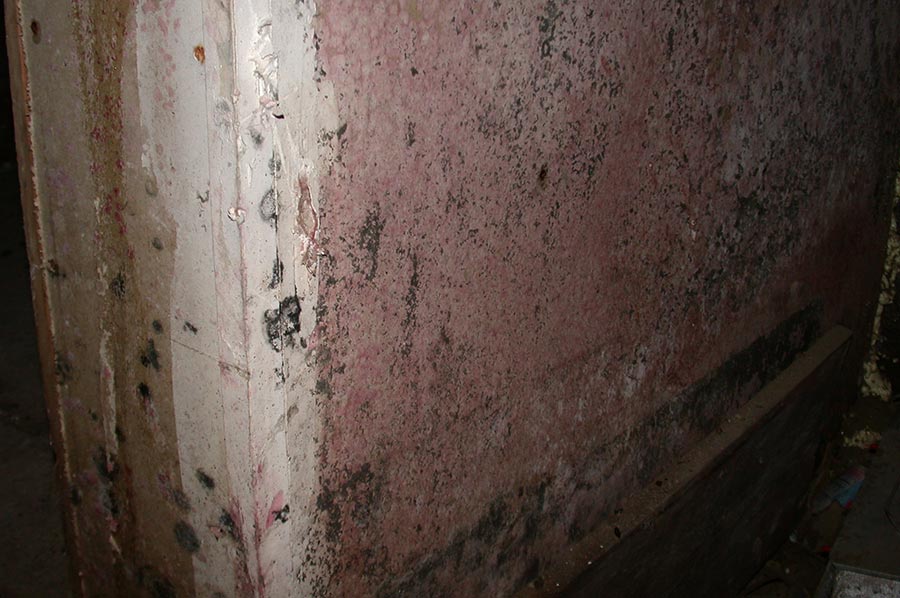 While mold no longer makes headlines, it’s still a common problem.  Contractors involved in residential basement waterproofing should be aware of how to protect themselves from mold claims.

Five years ago, mold and mildew litigation was at a fever pitch, with multi-million dollar lawsuits and claims of damaged heath.  And while the excitement has subsided, the risks have not.  Fortunately, new products and construction methods make it easier than ever before to ensure that your waterproofing jobs stay out of court.

The claim that household mold can cause serious health problems first gained serious traction in the late 1990s.  In 1998, the Florida Court of Appeals affirmed a $14 million verdict against the construction manager of a county courthouse, deciding that defective construction had created water damage, poor indoor air quality, and “toxigenic molds.”

This opened a flood of litigation between owners, tenants, building managers, construction companies, and basement contractors.  In one notable 2001 Texas case, a jury awarded a Texas family $32 million in damages due to mold in their home.  Interestingly, none of that money was for the family’s claims of personal injury.   It was based instead on the insurance company’s attempts to avoid paying a legitimate claim.  In addition to the original $6 million claim, the insurance company had to pay a $12 million fine, and reimburse the plaintiffs’ $8.9 million in attorneys’ fees.

As a result of the enormous sums of money awarded and the widespread media coverage of these cases, an entire industry sprang up around mold remediation. The most infamous species was “toxic black mold,”  Stachybotrys chartarum, which was blamed for everything from chronic fatigue and headaches, to pulmonary disease and even brain damage.

The media spotlight finally moved on to other things when the insurance industry removed mold coverage from their homeowners insurance, putting an end to most lawsuits.

Despite the lack of media coverage, though, mold is still a major issue.  The southern California law firm of Wood, Smith, Henning & Berman report that, “Large verdicts and settlements continue despite the lack of headlines.”  They prepared a brief, available through our website, detailing the state of mold litigation in 2011, and report on five million-dollar-plus settlements reached in the last 18 months.

Mold remediation also continues to be a major industry, and basement contractors involved in this line of work report steady profits despite the general economic downturn.

The Facts about Mold

Molds are a type of fungi and are everywhere in the environment. In the outdoors, molds are an integral part of natural processes, breaking down leaves, wood and plant debris. Indoors, however, mold can be a nuisance.  If moisture is present—above 80% relative humidity—mold can grow just about anywhere, including wallpaper, insulation, drywall, carpet, and wood.  Even if the substrate isn’t a food source—like nylon carpet or fiberglass insulation—mold can still grow thanks to an endless supply of dust particles that provide food.

Scientists have identified over 5,000 species of mold, about 150 of which can cause allergies in humans.

Still, the website of Smith, Gambrell and Russell, an Atlanta based law firm specializing in mold litigation, admits, “Despite the recent rash of mold-related litigation, the science regarding whether certain species of mold can cause significant and permanent health effects remains unclear…Although it is generally accepted in the scientific community that certain mold species can cause allergic reactions in individuals such as coughing, sneezing and breathing problems, there is a lack of scientific consensus regarding (1) whether mold can cause permanent and severe illnesses, and (2) what level of mold exposure may cause such illnesses.”

Additionally, some species of mold such as aspergillus are hardy enough to grow inside the lungs of human body, which some claim can lead to serious pulmonary disease.  According to the U.S. Centers for Disease Control and Prevention (CDC), “There are [claims] that toxic molds…can cause unique or rare health conditions such as pulmonary hemorrhage or memory loss. These case reports are rare, and a causal link between the presence of the toxic mold and these conditions has not been proven.”

Jeff May, owner of May Indoor Air Investigations and author of several books on indoor air quality including The Mold Survival Guide,  says some connections are being made.  “Children who are exposed to mold have twice the risk of developing asthma,” he says. “They also have higher rates of colds and respiratory ailments.”

May continues, “It’s a very complex issue.  The emphasis has shifted recently from mold exposure to additional factors that arise when living or working in a water-damaged building (WDB).  Mold is just part of that.  Every time I find mold, I find mold-eating mites—similar to dust mites.  A lot of people who come from these high-moisture buildings get exposed to these things.  There’s bacteria and insect allergens that need to be accounted for as well.” 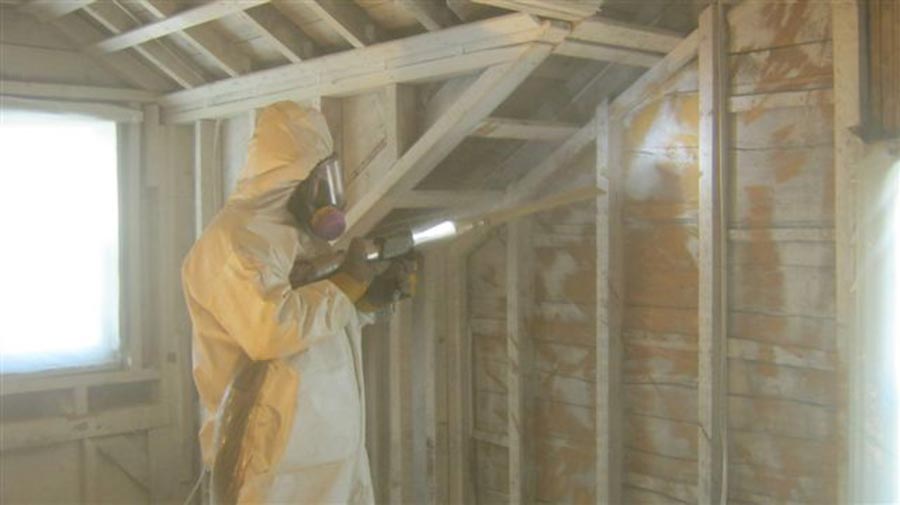 Remediation work is a specialized field requiring extensive training. Here, a worker in a HazMat suit and respirator uses a dry ice blaster to kill and remove mold.

May says that in the hundreds of mold inspections he’s conducted, the culprit is usually found in the basement or in the air handling equipment.

“I start by looking at the exterior to see if there’s any staining, moisture penetration issues, problems with the way the soil has been graded and so forth,” he says.  “Then I move inside and thoroughly check the basement, since that’s where problems typically start.”

The reason basements are so problematic is because of the “stack effect,” in which air moves from the bottom of the home upwards.

Lou Cole, president of Emecole, explains, “Basements and crawlspaces are the starting point for unhealthy air to enter the house.  As much as 50% of indoor air enters through the basement or the crawlspace.”  As the air warms, it rises into the rest of the home, carrying odors and mold spore with it.

“The sort of mold and mildew that thrives in moist basements are the same ones that cause health problems,” says Cole.   “Many people say they don’t ever go down there, but that air spreads throughout the living space and has a direct effect on the allergies of the occupants. What we’ve found is that basements and crawlspaces are the starting point for unhealthy air to enter the house.”

Ironically, May says the most visible mold, such the stuff found growing on the shower curtain, window sill, or tile grout, is usually harmless.

“People think that if they see mold, they have a problem, but that’s not necessarily true. Mold on a window frame is not what ordinarily makes people sick,” he says. “People see that stuff, and they’ll clean and disinfect it.  It’s the stuff that they can’t see that causes the problem.”

Carpet and fiberglass insulation are two major sources of problem mold, he says.

“The worst is moldy carpet.  If you have a moldy carpet, and you walk on it, you disturb those organisms, and you’re literally kicking hundreds of thousands of mold spores into the air.”

Batt insulation is a no-no for the same reason.  “Fiberglass insulation should never be used below grade,” May says.  “I’ve taken hundreds of samples of insulation.  Virtually 100% of the crawlspace samples had mold.  Basements were better, but a large majority had serious mold problems.”  Even though the fiberglass doesn’t provide a food source (neither do most carpet fibers) they trap dust, which combined with a little condensation, creates mold growth.

“You can’t see the mold,” says May, “and you’ll never see it because it’s microscopic.  It’s microscopic mold growing on microscopic food sources, but it’s enough to create a liability.

“There have been dozens and dozens of studies linking air conditioners and lung issues,” says May.  “Once again, it’s the dust and condensation that create issues.”  The added problem with mechanical systems is that the mold spores get blown throughout the living space.

Obviously, waterproofing con-tractors and basement finishers face enormous liabilities.  Fortunately, proper construction and remediation methods make it easier than ever before to ensure that your jobs stay out of court.

May recommends using hard surface flooring in all below grade areas.  “I don’t think it’s safe to put wall-to-wall carpet in a basement. Even with vapor barriers in place, condensation will often create enough moisture to foster mold growth.  Most people don’t replace basement carpet regularly, either.”  He says throw rugs are a good alternative.

When finishing basements, use rigid insulation, such as EPS or XPS foam or expanding polyurethane insulation.

The biggest issue, though is humidity.  “You’ve got to figure out a way to get the humidity below 50%,” says  Cole.  “If the humidity never gets above 50%, you won’t have a mold problem.”

Unless you’re located in an arid western state, the best option is a refrigerant-based dehumidifier.  A simple exhaust fan won’t work because the expelled air is replace with more damp exterior air. A refrigerant-based dehumidifier, on the other hand, removes the moisture from the air and actually lowers the relative humidity (RH).  May recommends installing a thermo-hygrometer (humidity gauge) to measure the RH with all remediation work to so the occupants can ensure the RH is at a safe level.

If mold is already present, follow industry standards for cleanup.  The Institute of Inspection, Cleaning and Restoration Certification (IICRC) created a set of mold remediation standards in 2004 that have since been accepted industry wide.  Even the U.S. the Occupational Safety & Health Administration (OSHA) uses it to “trigger remediation activities or confirm remediation success.”

It covers topics such as how to recognize mold problems, training and experience requirements for professionals involved in mold remediation, liability issues, personal protective equipment, and judging when contents can be cleaned and when they should be disposed of.

For those who are already in the waterproofing or basement repair business, mold remediation might be a good way to expand your services.  A number of  basement fiishing kits on the market are specifically designed to address mold issues with transforming basements into comfortable living space.

Cole says, “Up until a few years ago, waterproofing meant stopping liquid water leaking into basements.  Now it means a lot more than that. The end goal of the waterproofer should be to help clients figure out how to achieve healthy air.  That may mean more work for the contractor, but also more opportunity.” 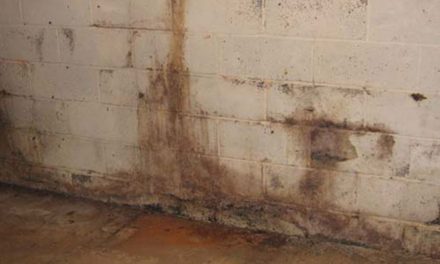 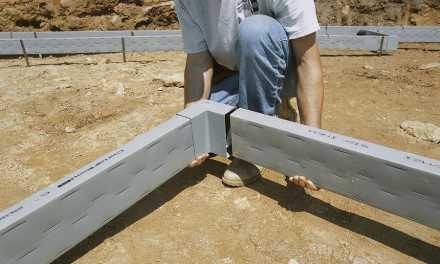 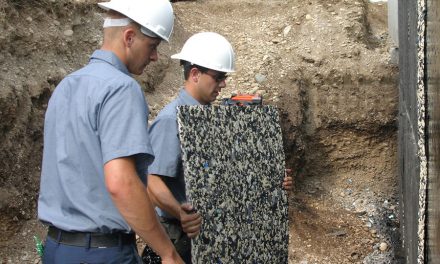